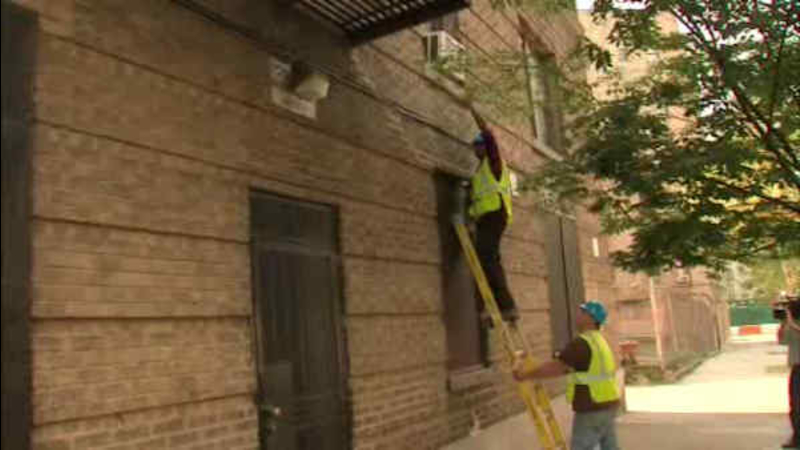 BRONX (WABC) -- A Con Edison worker is being praised as a hero after he came to the rescue of a baby that was about to fall from a window in the Bronx Friday.

Essa Waggeh, a 26-year-old mechanic, heard a woman screaming, looked up and saw the child and sprung into action.

"I'm just a typical New Yorker," he said. "Looking out for the city."

And a whole lot of people are grateful for that Waggeh was among a team called to Walton Avenue for a reported gas leak, when suddenly, he heard the screams from the second floor, where a 1-year-old baby girl had squeezed next to an air conditioner and out on the window ledge.

"One of the neighbors was screaming, 'We need help! We need help! There's a baby on the window,'" Waggeh said.

So, as the ConEd saying goes, Waggeh was "on it."

"The neighbors were around just in case she was to fall," he said. "And I ran and got the ladder."

He said the baby's mother wasn't home when this happened, and that she was staying with an aunt."

"I believe the aunt came down," he said. "I saw her rush to the baby and see if the baby was alright."

Late Friday afternoon, a woman from inside the apartment was seen leaving quickly, carrying a baby stroller. Neighbors tell Eyewitness News that police came and removed the baby from the home.

There are many unanswered questions remain.

"It's upsetting," one neighbor said. "Who would leave a child unattended? The baby is hanging out the window. What are they doing?"

But there is no doubt that Wasseh knows what he's doing, even though he can't say he's been doing it for long.