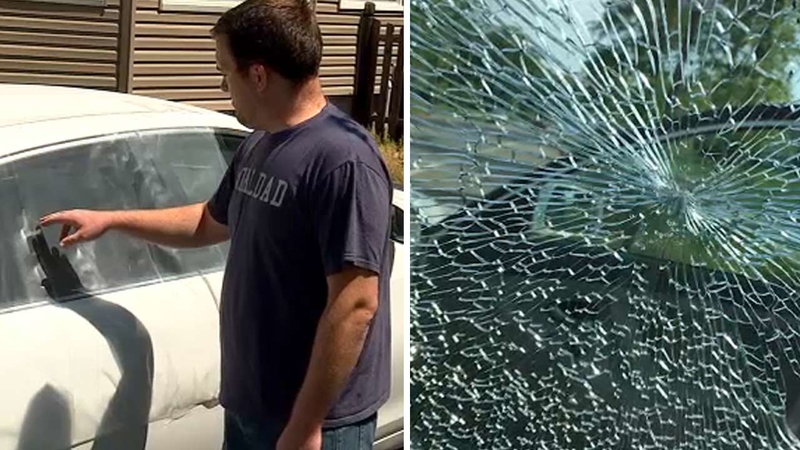 CEDAR GROVE, New Jersey (WABC) -- A New Jersey town is dealing with an individual or individuals who have created havoc by reportedly firing BB gun pellets at cars and even at people while they're walking.

The Sullivan's were driving down Fairview Avenue in Cedar Grove with two children in the car when the shots struck the passenger side of the car.

One of the shots hit at just about head level where Jason Sullivan's 3-year-old daughter Maisie was sitting in her car seat. His 1-year-old baby Isla was on the other side.

"I turn around and my kid is screaming," Sullivan said about Maisie who was covered with shards of glass.

He says everyone is ok, but didn't see anyone during the shooting.

The side Maisie was seated was facing the new Hilltop Townhomes, and that's where Sullivan believes the shot came from.

"On those apartments, the top level windows are visible from the road," Sullivan said. "The bottom ones are not. I can't think of anything other than someone sticking a BB gun or something out the window and popping off a couple of rounds."

Police say it's the fifth time that someone has taken aim and fired.

There have been five reports of cars being hit, and even someone who was out walking their dog was struck with a pellet.

The first incident happened back in April, which is still under investigation.

Jason says he is taking no chances driving this route.

"Personally, I'm avoiding it until they figure out what's going on," he said.

However, others in the area, like hometown girl Devin McMahon is keeping her routine, by running the route every day, but will be paying attention.

McMahon says she was surprised when she heard about the incidents.

The victim was attending the vigil for another homicide victim when a gunman opened fire from a passing white sedan.