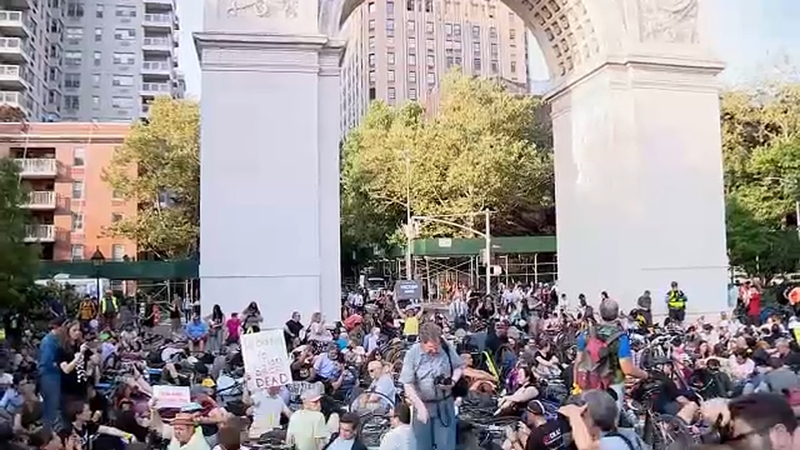 During the protest at Washington Square Park, there was a tense confrontation just outside the park between cyclists and the NYPD.

"This is the New York City police department," was the message from a police loudspeaker. "You are unlawfully in the roadway obstructing traffic. You are ordered to leave the roadway and utilize the sidewalk."

Cyclists rode down Fifth Avenue in protest, boiling mad after police used a squad car to box in a cyclist last week in the East Village.

Police said it was because that cyclist refused to pull over after officers said he blew through several red lights.

"Ride with us! Ride with us! I'm telling you one ride you guys will change your perspective!", said one cyclist.

The cyclists who squared off with police were just a small faction of the hundreds of demonstrators who turned out to protest, staging a mass die-in.
They were angry at Mayor Bill de Blasio, the Department of Transportation, and police. 15 cyclists have been killed by vehicles so far this year, more than all of last year.

"There's still an over sympathizing with car owners and attachment to car culture even within the NYPD at the highest levels," said New York City Councilman Jimmy Van Bramer.

"I'm looking to keep cyclists safe," NYPD Commissioner James O'Neill said Monday. "I don't want anybody to walk away from this press conference thinking that's not my primary concern. We've had 15 bicyclists killed so far this year. That's a concern to me personally, that's a concern to the NYPD."

The mayor calls it a crisis, saying he is deeply worried about the fatalities and is vowing to do something different.

The protest was largely peaceful, with one cyclist arrested for disorderly conduct.

The Department of Transportation released the following statement:
"This year's recent cyclist fatalities are senseless tragedies on our roads, and our thoughts are with all of the victims' friends and family. We continue our Vision Zero efforts to engineer safer streets and add more bike lanes to our growing network, and details on the new cyclist safety plan we are working on will be released later this month. To date, we have already averaged over 20 miles of protected bike lanes a year for the last three years, more than any other administration."

The DOT said the safety plan will include:
--New and expanded cycling infrastructure citywide that will further protect cyclists.
--New cycling-oriented policy changes, some of which will be pursued through state or city legislation.
--Increased public awareness and education programs that focus on cyclist safety, including aggressive outreach to truckers and industry partners.
--Further enhanced NYPD enforcement and work with the State on better truck enforcement.