Investigators said they believe the vessel was being used for human smuggling.
ABCNews
By Ivan Pereira 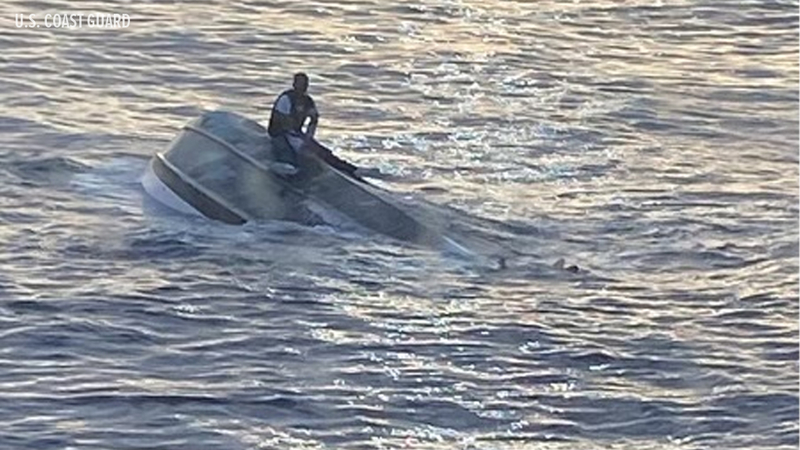 MIAMI -- One body has been recovered as a search continued Wednesday morning for 38 other passengers believed to have been on a human-smuggling boat that capsized in the northern Straits of Florida, officials said.

During a news conference Wednesday morning, a U.S. Coast Guard official said search and rescue crews are in a race against time to find any survivors.

"It is dire. The longer they remain in the water without food, without water, exposed to the marine environment, the sun, the sea conditions, every moment that passes it becomes much more dire and unlikely that anyone could survive in those conditions," said Capt. Jo-Ann Burdian, commander of the Sector Miami Coast Guard.

The 25-foot capsized boat was discovered around 8 a.m. on Tuesday roughly 40 miles east of Florida's Fort Pierce Inlet when a commercial tug-in barge operator radioed in that one survivor was found clinging to the hull of the overturned vessel.

"We often rely on sometimes heroic acts of good Samaritans operating in the marine environment and this case is no exception," Burdian said. "We're deeply grateful that the mariner located the survivor in this case and saved his life and called us so that we could continue to search for survivors."

Burdian said the survivor was in a hospital in stable condition on Wednesday and was being interviewed by federal Homeland Security investigators. The survivor said a total of 40 people were aboard the boat when it flipped over in treacherous sea conditions after launching from Bimini Island in the Bahamas on Saturday evening, Burdian said.

"We did recover a deceased body, who will be transferred to shore today in Fort Pierce and we continue to search for other survivors," Burdian said.

She said crews have already searched an area of about 7,500 nautical miles or about the size of New Jersey.

Burdian said aircraft crews have reported seeing some debris fields with items consistent with the number of people believed to have been on board the vessel.

"We do suspect that this is a case of human smuggling," Burdian said. "This event occurred in a normal route for human smuggling from the Bahamas into the southeast U.S."

She said the waters in the Florida straits can be quite treacherous.

"In cases like this, small vessels, overloaded, inexperienced operators at night in bad weather is incredibly dangerous," Burdian said.

Burdian would not comment on the origins or nationalities of the people believed to have been on the vessel.

"My focus remains on search and rescue," Burdian said.

She said the search will continue throughout Wednesday, but cautioned, "the search can't go on forever" and that the rescue operation will be re-evaluated on a daily basis.