Watch live coverage of the service in the media player below.
ABCNews
By Libby Cathey and Oren Oppenheim 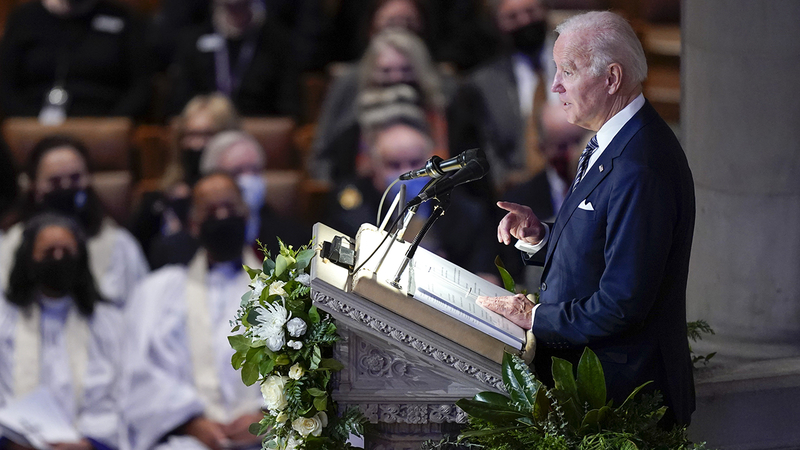 Dole died Sunday in his sleep at the age of 98.

The former GOP leader will be remembered for the tenacity that defined his career and his work on behalf of military veterans.

President Joe Biden delivered a eulogy at the funeral, which aired on ABC News Live, as well as on video screens at the World War II Memorial on the National Mall for public viewing.

He spoke of how Dole, at the age of 21, was gravely wounded in Italy when hit by enemy fire during World War II.

"Nearly eight decades on, we've gathered here in a world far different from the mountainous battlefield in 1945. But there's something that connects that past and present, wartime and peace, then and now," Biden said. "The courage, the grit, the goodness, and the grace of a 2nd lieutenant named Bob Dole, who became congressman Dole, senator Dole, statesman, husband, father, friend, colleague, and a word that's often overused but not here, a genuine hero."

Biden also addressed the current partisan divisions and infighting in the United States -- and how Dole sought to bridge that divide.

"In his final days, Bob made it clear that he's deeply concerned about the threat to American democracy," he said. "Not from foreign nations but from the division tearing us apart from within. And this soldier reminded us, and I quote, 'too many of us have sacrificed too much in defending freedom from foreign adversaries to allow our democracy to crumble under a state of infighting that goes more unacceptable day by day.'"

Dole served the country in war and in politics with pragmatism, self-deprecating wit and a bygone era's sense of common civility.

Biden, who served with Dole in the Senate for 25 years and has praised the late Kansas lawmaker for wit that crossed party lines, also remarked on Dole's service to the nation on Thursday at a Capitol ceremony as Dole lay in state -- an honor reserved for the most revered American officials.

"My fellow Americans, America has lost one of our greatest patriots," Biden said, looking to Dole's wife of 46 years, Elizabeth, who also served in the Senate, and his daughter, Robin, who spoke at Friday's funeral. "We may follow his wisdom, I hope, and his timeless truth -- that the truth of the matter is, as divided as we are, the only way forward for democracy is unity, consensus. The only way."

Former President Bill Clinton was among the dignitaries attending.

After the funeral, Dole's motorcade paused at the World War II Memorial, which Dole helped make a reality, for a ceremony paying tribute to his military service. There, Joint Chiefs Chairman Gen. Mark A. Milley and actor Tom Hanks had not forgotten.

"Bob Dole came to this plaza often; to remember, to talk with veterans like himself, and to their posterity, by greeting them with a shake of his left hand," Hanks said. "The memories and conscience of the man himself will always be here, right here for as long as there is an America. And that is a good thing. Because here, we will always remember Bob Dole."

A military bugler played taps in the cold December breeze.

His casket was then to be flown to Kansas where Dole will be honored at funeral services in his hometown of Russell and at the Capitol in Topeka, where he served in the state legislature for two years before beginning a 36-year career in Congress.

Dole, who nearly died in WWII and was later awarded two Purple Hearts, served as the Senate Republican leader for more than a decade and was instrumental in the passage of the Americans with Disabilities Act. He sought the presidency three times, winning the Republican nomination in 1996 before losing to incumbent President Clinton, who later awarded Dole the Presidential Medal of Freedom.

Dole announced in February that he had been diagnosed with stage 4 lung cancer and was starting treatment.