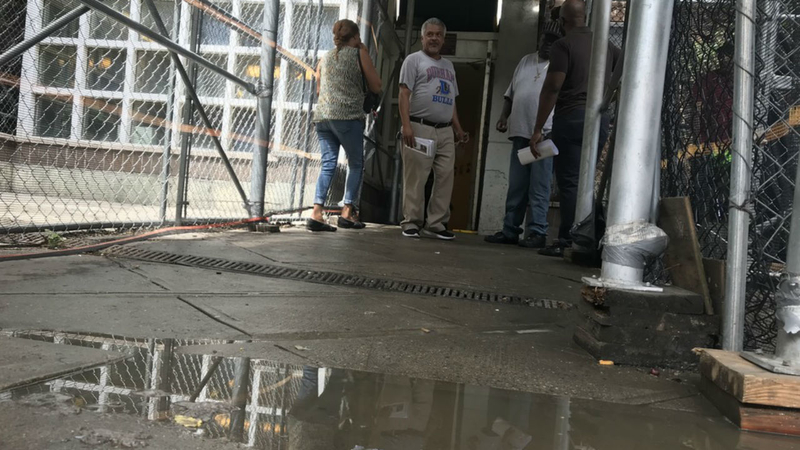 The flooding marked the third straight day of water issues at the public housing complex that left residents temporarily without water and the use of their elevators.

"It was crazy," said Aldia Corbin.

A NYCHA spokesperson said an initial break on Sunday on the 20th floor had exposed other weaknesses in the water pipe.

On Monday, another break on the 17th floor caused a waterfall of water to rush through the apartment complex, soaking people's belongings.

Residents said they were awoken early Tuesday to more flooding. This time, the break occurred on the 12th floor.

"Staff are onsite again today repairing a new leak. We are also going door-to-door to check on residents and provide any assistance they may need. We understand the frustration of our residents during this time and appreciate their understanding as we strive to complete all necessary repairs," a NYCHA spokesperson said in a statement.

Council Member Vanessa Gibson said a plumber identified the source of the problem in the 'R' apartment line. Gibson said workers would be securing the line at multiple other potential weak spots to prevent a fourth break.

"Three days in a row is a nightmare," Gibson said.

Gibson added that she would be asking for funding to ultimately fully replace line.

The flooding forced NYCHA to temporarily suspend elevator and water service while the repairs were made.

"I'm mad. I'm sick of it," said Kathy Marshall. "When is it going to stop? My whole apartment is a mess."

Marshall showed Eyewitness News where tiles had come lose in her apartment floor from the flooding. She said the flooding also created water damage in her walls which led to a hole and completely destroyed her bed.

A NYCHA spokesperson said residents would be provided claim forms to seek reimbursement for the damages they had incurred over the past three days.

Gibson said she would work to make certain residents would receive compensation even if they didn't have receipts to prove their purchases.

A NYCHA spokesperson also indicated the agency would be willing to work with residents as long as they were able to provide some context for when an item was purchased.