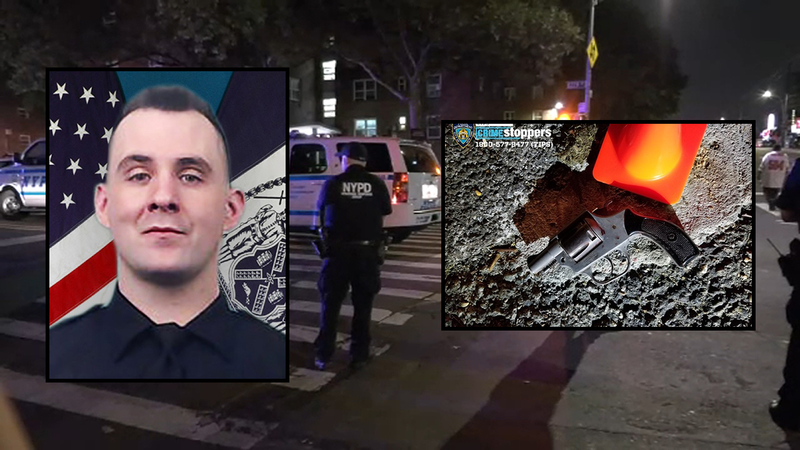 EDENWALD, Bronx (WABC) -- The NYPD announced Monday that Officer Brian Mulkeen, who was killed in the line of duty over the weekend, was struck by friendly fire.

Police Commissioner James O'Neill said Mulkeen was hit twice by police bullets while wrestling with an armed man during the confrontation early Sunday in the Bronx.

Funeral arrangements have been made for the near seven-year veteran of the force, who will be laid to rest on Friday (Details below).

Officer Mulkeen was honored once again Monday morning as his body was moved to a funeral home in Orange County.
EMBED More News Videos

Fellow officers saluted as Mulkeen's body went by in an ambulance.

Chief of Department Terence Monahan said at a press conference at Jacobi Medical Center that the shooting happened just after midnight near the Edenwald Houses at East 229th Street and Laconia Avenue.

NYPD officers assigned to the Bronx borough anti-crime unit were patrolling the streets around East 229th Street, there because of alleged gang activity that included recent shootings in that area.

Authorities say three officers in one police car got out of their vehicle to question a man, who fled and prompted a foot pursuit.

Police said Mulkeen retained possession of his weapon and fired five rounds at Williams, and then five fellow police officers fired at both men, striking Mulkeen twice, killing him.

Williams never fired his weapon in the struggle, but O'Neill placed the blame squarely on him, describing him as "a convicted felon with an illegal loaded firearm."

"This is a tragic case of friendly fire but make no mistake we lost a life of a courageous public servant solely due to a violent criminal who put the lives of the police and all the people we serve in jeopardy," O'Neill said.

Williams later died at the hospital. His firearm, a .32 caliber revolver, was recovered by police at the scene. Officials said he was on probation until 2022 for a narcotics-related arrest last year.


The NYPD is continuing to investigate the incident. All of the officers except Mulkeen activated their body cameras. He was unable to amid the struggle with Williams, O'Neill said.

"There is absolutely no worse moment on our job than this," Monahan said. "As we stand here this morning, a young man with a bright future who courageously patrolled some of New York City's toughest streets has tragically lost his life."

O'Neill said Mulkeen had served for nearly seven years and was appointed on January 9, 2013. He lived in Yorktown Heights with his girlfriend, who is also a police officer in the Bronx at the 44 Precinct.

Earlier on Saturday night, Officer Mulkeen arrested a male in possession of a gun in the very same precinct.

Flanked by New York City Mayor Bill de Blasio, Monahan called the officer "a hero" and "brave," and said he was doing "a job that New Yorkers needed him to do."

NYPD showing up to Jacobi Medical Center after an officer is shot overnight in the Bronx @ABC7NY pic.twitter.com/3u5oE83Cem

"We've been here too often, we know the directions to get here," Patrolmen's Benevolent Association president Pat Lynch said at the press conference. "It has to stop."

The Fordham University Track and Field program released a statement mourning the loss of Mulkeen, who was a field captain for Fordham during the time he competed from 2004 to 2008 and had recently decided to re-join his alma mater as a volunteer throwing coach.

This is the second NYPD officer killed in the line of duty this year. Detective Brian Simonsen was accidentally shot by fellow officers in February while confronting a robbery suspect.