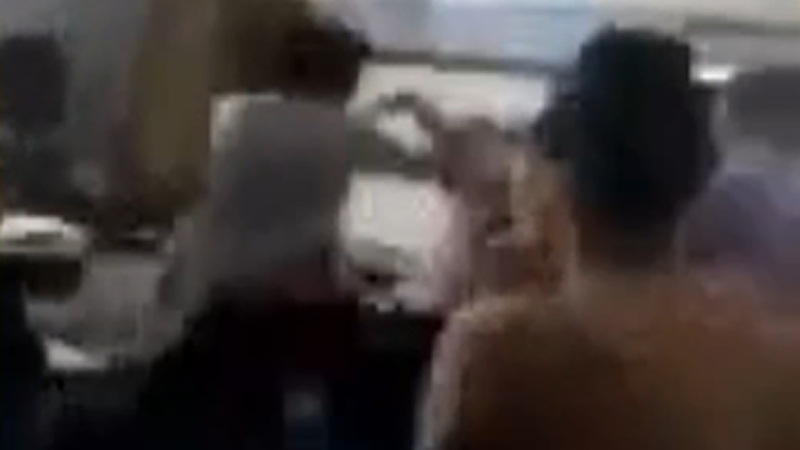 BRONX, New York CIty (WABC) -- New video raises questions about what led to a deadly stabbing in a school in the Bronx.

The attorney for Abel Cedeno says it shows a group of students rush Cedeno before he's accused of fatally stabbing a 15-year-old classmate back in September.

"You see the punch in the pink shirt? And yeah, that's the other student that was stabbed," attorney Tom Shanahan said.

Defense attorneys say 18-year-old Abel Cedeno is seen in the video in a pink shirt, backing away from Matthew McCree, who is prominently shown in a white shirt. It's a nine-second clip from the fatal high school fight last year, they say proves self-defense.

The video was just turned over to the defense last week by the Bronx District Attorney's office, which defense attorneys also question.

In response, the District Attorney's office says "Cedeno has been indicted for manslaughter in the death of 16-year-old Matthew McCree, and faces assault charges for stabbing Ariane Laboy, who defense attorneys say is seen in the video attacking their client."

"The class was very rowdy and loudness and everything. I just snapped," defendant Abel Cedeno said.

"It is Abel's position that Mr. McCree indicated that he was next," Shanahan said.

That is why the 18-year-old took a knife to school, according to his attorneys, because he had been repeatedly bullied.

The attorney for McCree's family says "Let's look at all the evidence, including what the witnesses saw before we come to any conclusions."

One former prosecutor says the same.

"That video is not dispositive. It will not prove anything without additional facts to support it," Brian M. Wagner, Esq., Former Kings Co. Prosecutor, said.

But Cedeno's attorney hopes it's a game changer.