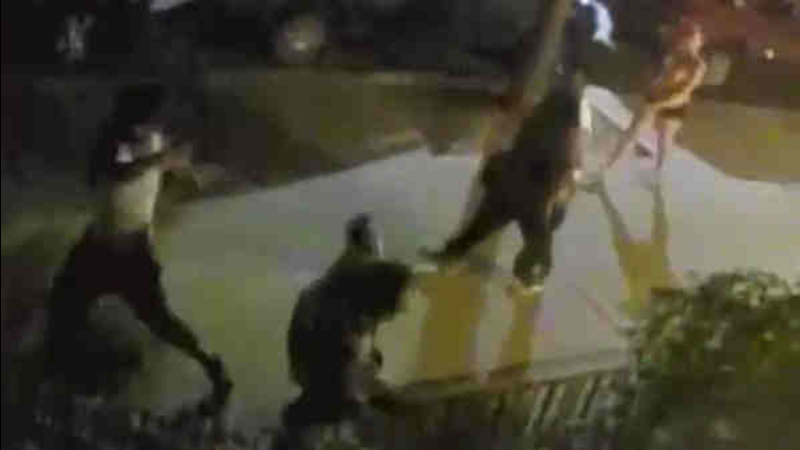 BROOKLYN HEIGHTS, Brooklyn (WABC) -- Police are looking for several people in connection with an attack on a man in Brooklyn Heights earlier this month. Now, that man is speaking out about the brutal attack.

Typically during these knockout type incidents in the past, the suspect usually creeps up behind the victim, but not in this case. The suspect walked dead on toward the victim.

"Initially nothing seemed out of the ordinary. All I knew is my face felt wet and my hand came away, covered with blood," said Richard Carey, the victim.

Blood was gushing from Carey's left eye. It took two weeks and a few stitches to heal after the sucker-punch.

"Hit me right there, so opened up a cut here and a cut here. Methodist Hospital sutured me up, kept me for observation," Carey said.

The 65-year-old was walking home from dinner, just after 11 p.m. on Wednesday, July 6th on Joralemon Street in Brooklyn Heights when he noticed a group of teens walking toward him.

"No looks, no glances. I reached in my pocket for my keys and the next thing I knew I was upside down in the bushes," Carey said.

Carey said the guy who hit him did try to cover his face first.

If you look at the surveillance video, looks like he took his shirt and wrapped it around his head. Just a little slit for his eyes.

It was full force that knocked the fully grown man off his feet and over a fence.

"I went over; I think it was underneath this tree. I found my glasses the next day under there," Carey said.

The man who struck the victim is described as black, 5 feet 10 inches, 160 pounds, and wearing black sneakers and a white T-shirt.