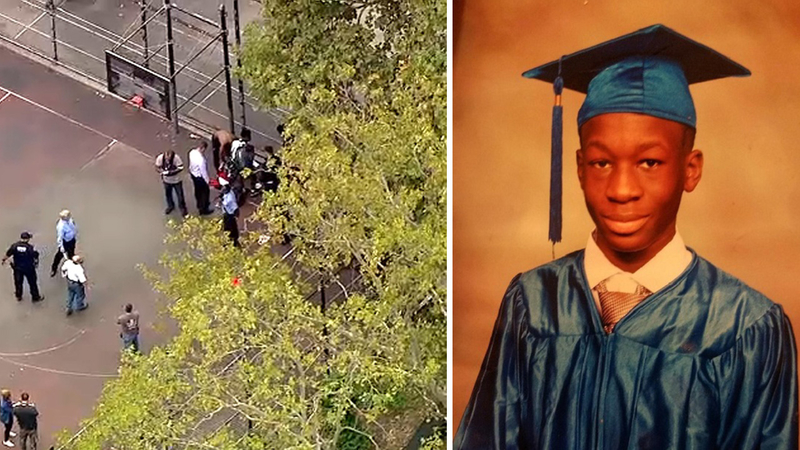 BROWNSVILLE, Brooklyn (WABC) -- Police are investigating after a 16-year-old boy was killed in a shooting on a basketball court in Brooklyn Friday afternoon.

It happened at a playground at Chester Street and Sutter Avenue in the Brownsville section just before 4 p.m.

Oluwadurotimi ('Timi') Oyebola was rushed to Brookdale Hospital where he was pronounced dead.

Marcus Solis has the latest on the death of a teen fatally shot in Brooklyn.

As the teens were playing, police say shots were fired from over 100 feet away. Oyebola was shot in the head.

Officers were questioning a group of people who were on the court at the time of the shooting. Police are searching for two men who were seen fleeing from the playground.

No arrests have been made, and no suspects are in custody.

Oyebola's family moved to the US from Nigeria five years ago.

He lived in Jamaica, Queens but attended a charter school in Brownsville. His father, who is a pastor, says his son was an honors student.

"He was supposed to get a Columbia University award by November 10th," said David Oyebola. "Performing extraordinary academically - so they just shot his life."

"The Ascend community is devastated by the news that the life of our student and friend Oluwadurotimi ("Timi") Oyebola has been taken in an act of utterly senseless gun violence. Our deepest condolences are extended to his family and friends, and as a community we are focused on supporting them and providing counseling to his friends and teachers on site. Oluwadurotimi's future was bright, and it is simply unfathomable that it was cut short so heinously."