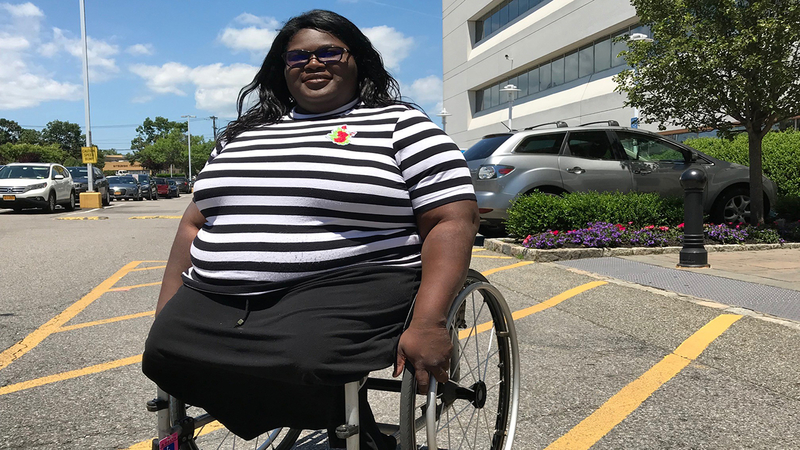 WESTBURY, New York (WABC) -- A Long Island woman is speaking out after she says an Uber driver left her stranded when he discovered she has a wheelchair.

Bryanna Copeland, 25, says the Uber driver refused to drive her after he realized that she is disabled.

"Finished work just like everybody else at the end of the day, just was trying to get a ride," she said. "I always try my best."

Copeland, who has no legs, said that prior to when she started recording him on her cell phone, he took one look at her and her wheelchair and said no.

Copeland said that even after she offered to fold up her wheelchair and enter the vehicle by herself, the driver still did not want to drive her. She also claims the Uber driver demanded that she cancel the ride instead of him.

"He really had no reason," she said. "He just didn't want to cancel the ride."

The driver, driving a white SUV, claimed that he didn't have room for the chair in a cell phone video recorded by Copeland.
After the incident, Copeland is apprehensive to ride in an Uber again.

"It makes me nervous to know that I don't know if the next driver is going to do the same thing or not," she said.

Uber tells Eyewitness News it is investigating the allegations, which Copeland says are a clear violation of the Americans with Disabilities Act. Uber also says as part of its sign-up process, drivers do receive information on transporting passengers with disabilities.

Copeland has since been refunded for her ride. In a statement, Uber stated that, "We continue to work with driver-partners in New York to expand transportation options for all residents. We have a clear non-discrimination policy that includes serving riders with disabilities."