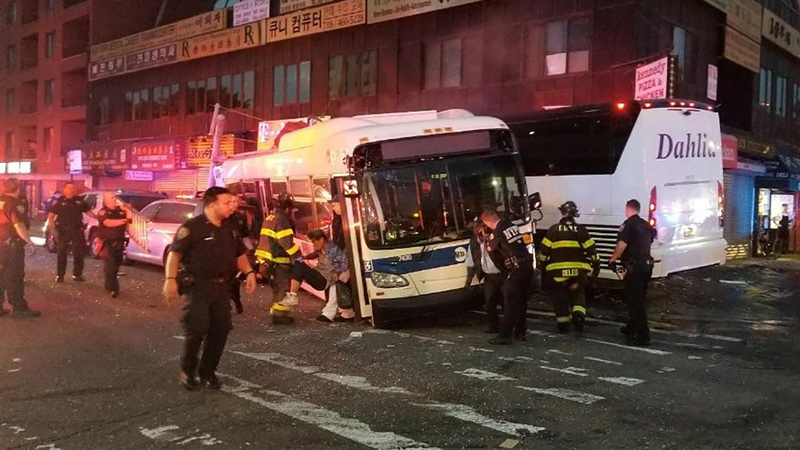 FLUSHING, Queens (WABC) -- Three people were killed and 16 were injured when an MTA bus and a charter bus collided in Queens early Monday.

The Q20 bus collided with the Dahlia charter bus at Main Street and Northern Boulevard in Flushing around 6:15 a.m., and authorities were investigating reports that the charter bus had run a red light.

The NYPD and FDNY responded to the scene and began removing passengers.

"It was bad, it was really bad," witness Mike Ramos said. "I felt the vibrations shake my truck...I saw a guy with a cracked head, a cracked skull open. I saw guys bleeding all over the place...When I ran across the street, there was a woman pinned, screaming in the back of the city bus. I guess she was one of the pedestrians walking on the sidewalk."


All of the victims were quickly taken off the buses, with the exception of one of the drivers, who was pinned in the bus and needed to be extricated. One person was pronounced dead at the scene after being found underneath one of the buses, leading authorities to believe that person may have been a pedestrian.

Eyewitness News has learned that Mong was previously fired from the MTA because of a DUI.

The MTA driver in the crash, a 10-year veteran, "is in the hospital in non-critical condition, he's being spoken to," authorities said.

The force of the collision sent the charter bus onto the sidewalk and into a Kennedy Fried Chicken, sparking a small fire. The flames were quickly extinguished, but there is extensive damage to the structure.

The cause of the crash is under investigation, but one witness who was in a car that was nearly struck by the charter bus said it was speeding and ran several lights.

"It's hard to compare it to anything I've ever seen, the sheer destruction from the impact of this collision," de Blasio said.

The NTSB is sending team to New York City to investigate the crash.

Another Dahlia charter bus was involved in a 2016 bus crash on Interstate 95 in Connecticut that killed one and injured 36.

In that incident, the driver lost control on the snow-covered highway, skidded off the road and rolled over. The bus was being operated by VMC East Coast at the time. It appears the company that owns the buses was most recently flagged by Federal DOT for a high number of safety violations, including 10 in the last 24 months for speeding. It's not clear if the bus in Monday's incident was being leased by another operator.
Report a correction or typo
Related topics:
trafficflushingqueensnew york citybus crashbus accident
Copyright © 2022 WABC-TV. All Rights Reserved.
TOP STORIES
Bear stuck in tree in backyard of home in New Jersey
9-year-old girl killed in NYC had bed dropped on head, prosecutors say
Family mourns 18-year-old killed in Jersey shore sand collapse
Biden invokes Defense Production Act for formula shortage
LIVE | Eyewitness News and more, 24/7
AccuWeather: Wet start and a sunny afternoon
2 sets of twins graduate high school as valedictorian and salutatorian
Show More
African Americans experiencing trauma after Buffalo shooting
NYC mayor firm against mask mandates despite 'high' COVID alert
NYC bus drivers rally, demand changes to prevent assaults
Violent body-slam robbery caught on camera in NYC
1st monkeypox case in US this year reported in Massachusetts
More TOP STORIES News