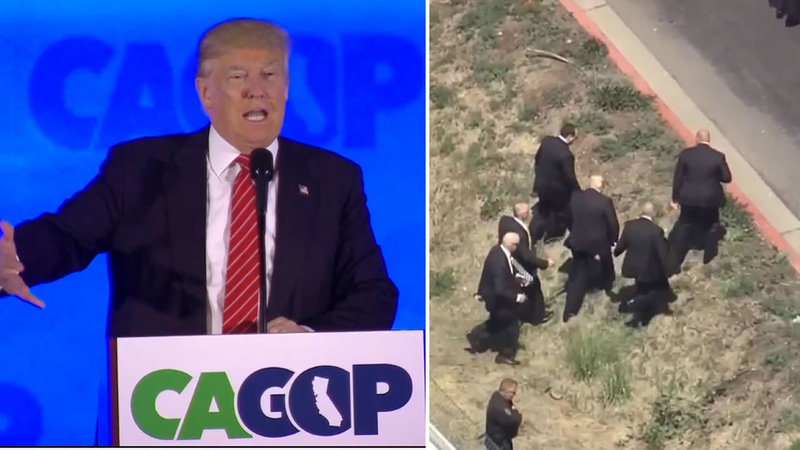 BURLINGAME, California -- Hundreds of rowdy protesters broke through barricades and threw eggs at police outside a hotel where Donald Trump addressed the state's Republican convention. Several Trump supporters said they were roughed up but no serious injuries were reported.

The protest just outside San Francisco occurred Friday, a day after anti-Trump protesters took to the streets in Southern California, blocking traffic and damaging five police cars in Costa Mesa following a speech by the leader in the race for the Republican presidential nomination.


Demonstrators at both locations waved Mexican flags, an action meant to counter Trump's hard stance on immigration and disparaging remarks about Mexico.

Because of the protest, Trump was rerouted to a back entrance. In a surreal scene, news helicopters showed the billionaire businessman and his security detail walking between two concrete freeway barriers before hopping down onto a grass verge and walking across a service road.

"That was not the easiest entrance I ever made," Trump quipped when he started speaking to the convention delegates. "It felt like I was crossing the border."

Outside, crowds of anti-Trump demonstrators broke through steel barricades and pelted riot police with eggs as the officers stood shoulder-to-shoulder to keep the demonstrators from entering the hotel.

A man wearing a red hat bearing the Trump campaign slogan "Make America Great Again" was punched in the head from behind while being jostled by a group of shouting protesters. Another Trump supporter said he was punched and spit upon by demonstrators who also threw his phone to the ground.

"It went gangbusters. They attacked me," said Chris Conway, a mortgage broker from San Mateo.

Burlingame is right outside San Francisco, a liberal bastion that became the focal point of the immigration debate last year when an immigrant in the country illegally, and who had been deported multiple times, shot and killed a woman walking with her father.

Immigration has been one of Trump's main issues and he often has highlighted the San Francisco killing while touting his plan to build a wall along the entire Mexican border.

California's primary is June 7, a date once seen as too late to influence the selection process. Now it is seen as the election that either gets Trump over the threshold needed for the nomination or leaves him just short.

He'll likely make many visits to California in coming weeks. That and his hard stand on immigration in a state where millions of immigrants live and that's run by Democrats who generally support more benefits, services and job opportunities for those in the country illegally raise the prospects of more raucous demonstrations.

In Orange County, once a Republican stronghold but now home to a surging Hispanic population, a vocal but peaceful demonstration before a rally and Trump speech turned violent afterward. At least 17 people were arrested, five police cars were damaged and an officer was hit in the head by a rock but not seriously hurt, authorities said.

One Trump supporter had his face bloodied in a scuffle as he tried to drive out of the Pacific Amphitheatre area.

Dozens of cars - including those of Trump supporters trying to leave - were stuck in the street as several hundred demonstrators blocked the road, waved Mexican flags and posed for selfies in front of lines of riot police.

There were no major injuries and police did not use any force.

Group of #DonaldTrump protesters growing outside #CAGOPConvention in Burlingame. pic.twitter.com/4Lmxw9AoTv

In the middle of two lines of police in riot gear outside #CAGOPConvention.
Old Bayshore Highway blocked. pic.twitter.com/ajH0nx7YU5

Protesters in Burlingame for #CAGOPConvention. #DonaldTrump speaks at noon. pic.twitter.com/1pSyMSerbH