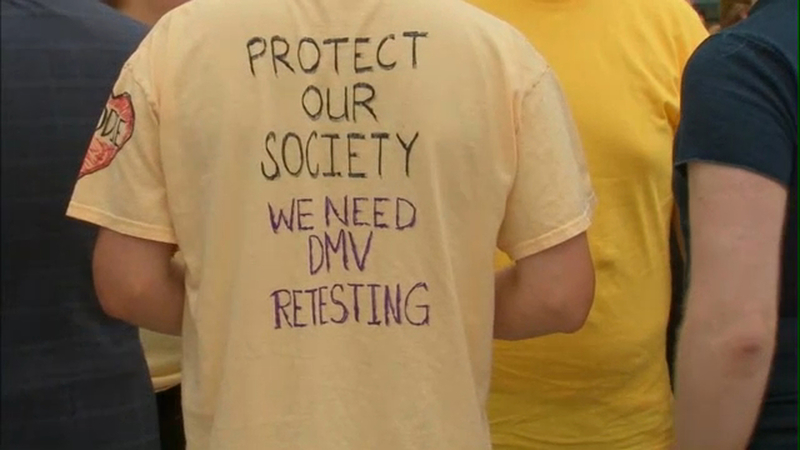 Calls for retesting of elderly drivers

NEW YORK (WABC) -- The families and friends of young people killed recently in New York City by elderly drivers rallied Monday night to demand that the state test the driving skills of anyone over the age of 80 every two years.

Currently, other than a vision exam, there is no test to judge their driving capability.

There were tears Monday night at the spot where 17-year-old Maddie Sershen died as her friends and family gathered.

"Maddie was one of a kind, she was my best friend and my cousin," said Skyler Nenadich.

It was June 25th and Madeleine Mary Sershen was walking through a crosswalk on Utopia Parkway when she was struck and killed by a car driven by an 88-year-old woman who police say blew through the red light.

Friends and family are turning their pain into action, hoping to change DMV policy to have seniors renew their drivers license more frequently and with more comprehensive tests.

They have a petition with more than 25,000 signatures.

"Through the pain and the heartache and the tears in this terrible tragedy, one thing was made abundantly clear and that's change has to happen, the DMV has to change its renewal policy," said Maddie's aunt Rita Barravecchio.

"My son died for no reason," said Raul Ampuero, the father of Giovanni Ampuero, who was nine years old when he was hit and killed by an 86-year-old driver, just a month before Madeleine was killed.

"Couple of weeks we lost another life, why do you need to lose a life?", said Raul.

The problem they are trying to change, senior citizens who may drive a little longer than they should, has never been addressed at the state level before.

"The largest demographic are seniors and they've earned every right that they have, and they vote," said Queens Councilman Paul Vallone.