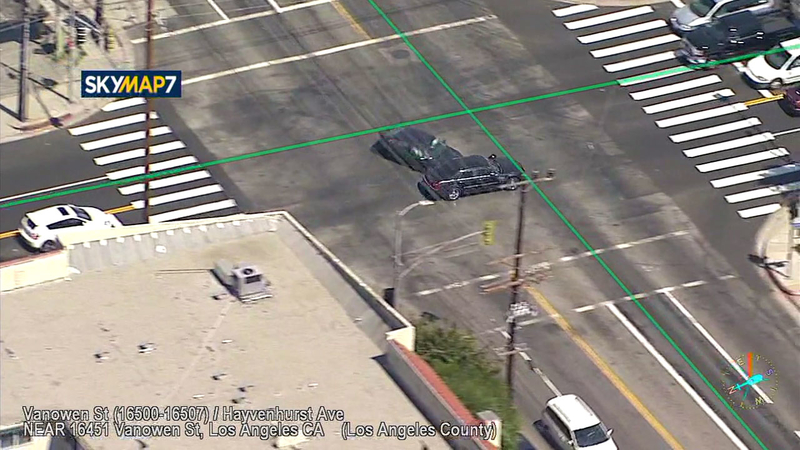 The suspect in a Chrysler sedan led officers on a chase at speeds that hit 80-90 mph at times on surface streets, swerving through traffic, clipping cars and running lights in the Lake Balboa and Van Nuys area.

He briefly got on the 405 freeway and hit speeds close to 110 mph before returning to surface streets.

An armed carjacking suspect led Los Angeles police officers on a high-speed chase over San Fernando Valley surface streets Wednesday before crashing at a red light and being taken into custody.

The chase ended when the suspect barreled through a red light at Vanowen Street and Hayvenhurst Avenue at nearly 60 mph and was broadsided by a oncoming car. He jumped out and fled on foot as a bystander helped police chase him.

The bystander was the first to reach the suspect and helped tackle him as officers arrived with guns drawn and took him into custody.
It was later learned that the bystander who aided in the chase was an off-duty LAPD reserve police officer.

An off-duty reserve police officer helped with the foot pursuit of a suspect after a high-speed chase in Van Nuys on Wednesday, July 19, 2017.

The chase began with an armed carjacking at a home in Panorama City.

The son of the car's owner told Eyewitness News he spotted the vehicle and tried to confront the suspect and take back the car. But the suspect flashed a gun and took off, nearly running him over.

"He almost ran my little brother over. He was about to run me over too. He almost took me with the whole car."

An LAPD helicopter spotted the car driving erratically in the area and the pursuit began.

The chase resulted in at least two injuries, along with a number of close calls.

A female driver in the vehicle that collided with the suspect at the intersection was injured and treated by paramedics.