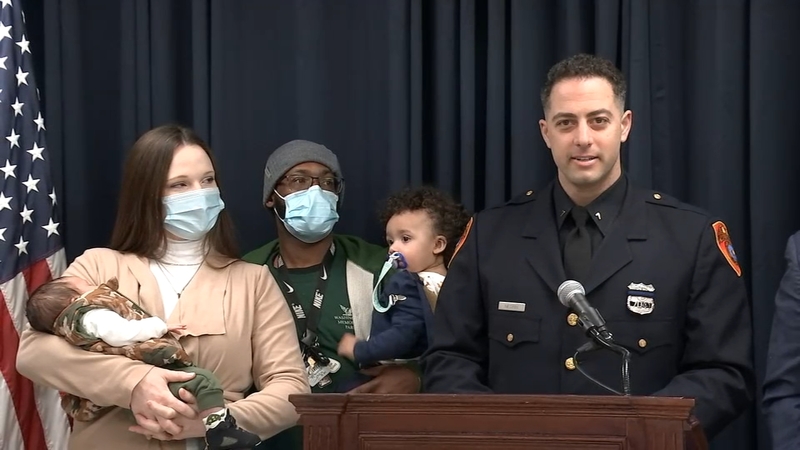 YAPHANK, Long Island (WABC) -- A mother and her new son reunited Wednesday with a Suffolk County police officer who, with the help of a paramedic, helped deliver and save the baby born on Christmas Eve.

Seventh Precinct Officer Kyle Negrin responded to a call for a woman in labor in a vehicle on Francis Mooney Drive in Ridge around 7 p.m. on December 24.

Chelsea Anderson, 28, of Middle Island, had been scheduled for a C-section due to the umbilical cord being wrapped around the baby's neck.

The baby, however, had other plans.

"It was a very unexpected delivery," she said. "I was very nervous, very scared, especially with the umbilical cord wrapped around three times."

The Ridge Fire Department ambulance arrived, and Negrin joined Paramedic Eric Ramirez in the back.

They were about five minutes from Stony Brook University Hospital when Baby Avion arrived, and Negrin and Ramirez successfully unwrapped the umbilical cord.

"They said five minutes, and it was kind of like when you have to use the bathroom and you're close to home," Anderson said. "You really have to go the closer you get."

Thanks to their efforts, both Anderson and her son are healthy.

"It was definitely an honor," Negrin said. "Probably the proudest moment of my whole career delivering Avion."

And he's had quite a career. At age 32, he's spent eight years as a police officer, a trained EMT since age 18, and an experienced father of three.

Avion already has a big brother, Asher, but the best part -- a guardian angel in Officer Negrin -- who says he just felt blessed in a career that often involves tragedy.

"Whether it be a fatal car accident, a shooting, a lot of negative things that police deal with, this was something nice and a good feeling to deal with," he said.

It's almost time to file your federal tax return and there are a handful of changes you need to know about, including steps you need to take regarding child tax credit payments.

"And even though Chelsea wasn't due to give birth until the 27th with Avion, life doesn't always work out that way."