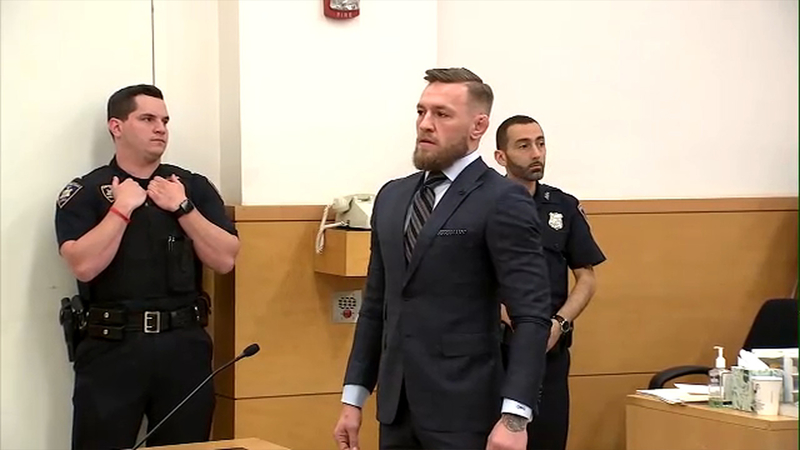 It stems from an incident caught on camera, where McGregor is accused of throwing a hand-truck into a bus. It smashed a window during a UFC media day at Barclays Center in April.

Under the plea deal, the judge sentenced him to community service and anger management, and also imposed orders of protection involving two other fighters until July 25, 2020.

"I just want to say im thankful to the DA and the judge for allowing me to move forward," McGregor said outside the court. "I want to say to my friends, my family, my fans, thank you for the support."

The 30-year-old Irish brawler, who last month said he regretted his actions, then rushed to a waiting SUV with his entourage, separated by bike-rack barricades from dozens of photographers and reporters and a self-professed superfan.

"You're the champ Conor!" Robbie Fox yelled, an Irish flag draped around his neck. "They won't do anything to you Conor, you're the champ!"

The two fighters, Michael Chiesa and Ray Borg, were injured by shattered glass and were unable to compete.

A spokesperson for the Brooklyn District Attorney released a statement saying, "This is a fair resolution that holds the defendant accountable, ensures restitution for the victims and requires the defendant to perform community service where he can reflect on his conduct and give back to society."

Cian Cowley, 25, a fighter who trains with McGregor, also pleaded guilty to the lesser charge of disorderly conduct and agreed to community service and anger management.

McGregor agreed to pay restitution for the damage to the bus.

Because of the plea deal, he will not have a criminal record and will likely be back in the fighting ring down the road.

There are no restrictions on McGregor's travel. If he stays out of trouble for a year, his record will be wiped clean. If he violates the terms of his plea deal, he could be jailed for up to 15 days.

McGregor, once the UFC's simultaneous 145- and 155-pound champion, hasn't fought since the fracas.

The UFC stripped him of its 155-pound championship belt in April because he had not fought in 17 months. During that time, McGregor turned to boxing and secured a guaranteed $30 million payday despite losing a highly anticipated bout last year to Floyd Mayweather Jr.

The UFC declined to comment Thursday on the outcome of McGregor's case.