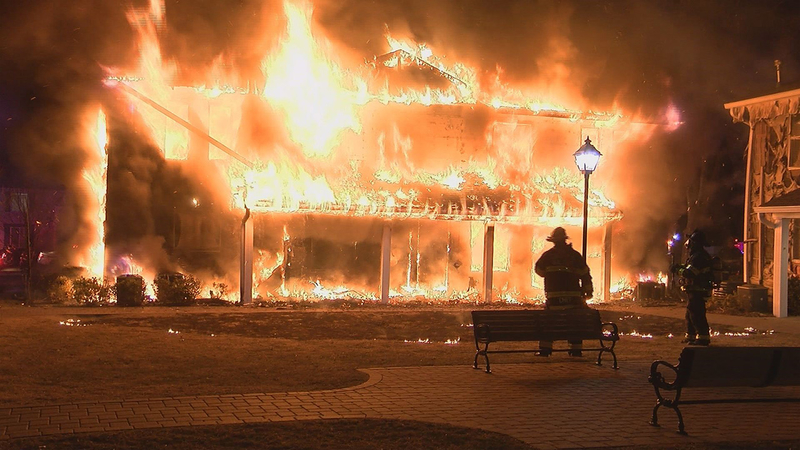 Several people and pets had to be rescued from the building at the Fairfield Apartments on Country Club Drive in Coram, which ended up being completely engulfed.

A security guard noticed the flames and called 911 around 2:45 a.m.

Police officers were first to arrive at the scene and went door to door to get people out safely.

Officers even helped save pets, and video showed one officer handing a cat to one of the fire victims.

Residents in the two-story building say they had seconds to get out. "The whole top awning of my apartment was engulfed in flames," said fire survivor Dottie Carpin. "It was scary, really scary..and I don't have anything."

Fire crews worked to get the flames under control, but one firefighter fell through the floor while battling the blaze.

Firefighters later found 71-year-old Susan Harelick dead. Police say Harelick, who was on oxygen, barely made it outside and was then crushed in the debris.

"She was right outside her building," said Det. Lt. Kevin Beyrer of the Suffolk County Police Department. "She fell, collapsed, debris fell on top of her."

Officials also determined that the fire originated in her apartment.

One other resident next door on oxygen was taken to Stonybrook University Hospital, but he is now home recovering.

Officials say the fire is not suspicious.