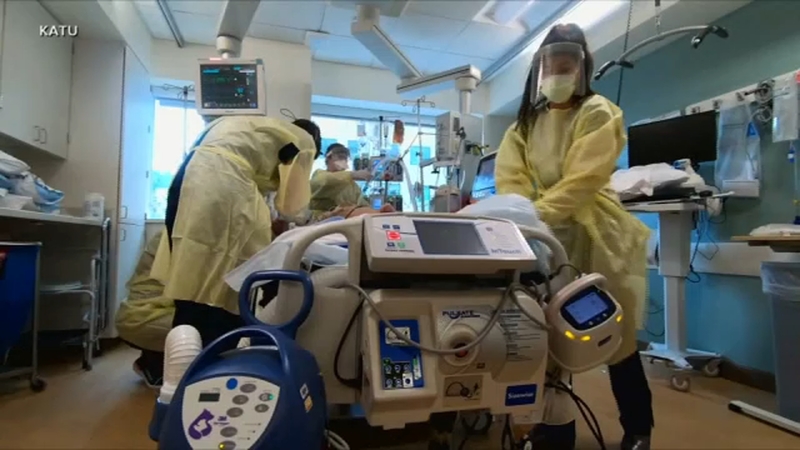 NEW YORK (WABC) -- The CDC says the delta variant is still the cause of 99% of the current coronavirus cases in the U.S.

When it comes to the omicron variant, the White House and federal health officials are saying be concerned, but don't panic.

22 states have seen about a 10% increase in hospital admissions over the past week.

Another constant theme from health officials is that the best defense against all variants is to be vaccinated.

"Delta continues to drive cases across the country, especially in those who are unvaccinated," CDC Director Rochelle Walensky said.

Nearly 60,000 Americans are currently in the hospital battling COVID.

New York Governor Kathy Hochul says that three additional cases of the omicron variant have been found in New York. All three of the new cases are from New York City, making for a total of seven city residents who have tested positive for the new variant. One other case from Suffolk County has been detected, making for a total of eight cases in New York state. "We knew the Omicron variant was coming and we expect to see more cases. But let me be clear: We are not defenseless," Governor Hochul said.

Since testing positive on November 28, the woman has remained in isolation. She experienced moderate symptoms and is now recovering after receiving care in a North Jersey emergency department. The New Jersey Department of Health laboratory performed sequencing on the specimen to confirm it was the Omicron variant.

Religious, non-public schools push back against new NYC COVID vaccine mandate
The Committee of New York City Religious and Independent Schools is firing back Friday after Mayor Bill de Blasio announced a new COVID-19 vaccine mandate that will require all nonpublic school employees to get their first shot by December 20. It affects roughly 56,000 employees of 938 yeshivas, Catholic schools and other private schools.
"Many of our schools view COVID vaccination as a matter most appropriately left to individual choice, not governmental fiat," Chairman Rabbi David Zwiebel wrote. "This is an area where government should be using its bully pulpit to persuade, not its regulatory arm to coerce."

'Caution not panic': Officials confirm 5 omicron cases in New York
Officials are urging caution, not panic, after New York has been added to the growing list of states with confirmed cases of the COVID-19 omicron variant. Those states include Minnesota, where a man is believed to have contracted the variant of COVID-19 during a visit last month to the Javits Center in Manhattan.

Study suggests omicron variant may overcome immunity protection from previous COVID infection
South African scientists are warning that reinfections among people who've already battled COVID-19 appear to be more likely with the new omicron variant than with earlier coronavirus mutants. A research group has been tracking reinfections in South Africa and reported a jump with the arrival of omicron that they hadn't seen when two previous variants, including the extra-contagious delta variant, moved through the country. The findings, posted online Thursday, are preliminary and haven't yet undergone scientific review. Nor did the researchers say what portion of the reinfections were confirmed as omicron cases - or whether they caused serious illness.

Germany: 1 in 100 infected with virus, health minister says
Germany's health minister said Friday that more than 1% of the population - almost a million people - are currently infected with the coronavirus, and called on citizens to get vaccinated if they haven't done so yet. The country confirmed 74,352 new daily COVID-19 cases and 390 additional deaths, figures published by the federal disease control agency showed. According to the Robert Koch Institute's calculations, some 925,800 people in Germany are considered actively infected with the virus. Health Minister Jens Spahn noted that the number of unvaccinated residents who are infected and seriously ill is much higher than their share of the overall population.
"If all German adults were vaccinated, we wouldn't be in this difficult situation," he told reporters in Berlin.

Antonio Brown allegedly asked chef to obtain fake COVID vaccine card
Antonio Brown and two other NFL players have been suspended immediately for three games by the league for violating COVID-19 protocols. The Tampa Bay wide receiver and teammate Mike Edwards were suspended Thursday. Free agent John Franklin III, if signed by a team, is also ineligible to play in the next three games. All three players have accepted the discipline and waived their right of appeal. The suspensions are effective immediately.

Officials investigating how anti-vaccine poster ended up in NYC bus stop
An anti-vaccination ad, designed to look like a New York City ad encouraging vaccination, somehow ended up in a bus stop in Brooklyn. The poster was spotted by a Twitter use at a B43 bus stop at Carroll Street and Kingston Avenue in Crown Heights. The Department of Transportation outsources bus stop ads to a vendor, who is telling them they didn't sell this. DOT is now investigating whether someone vandalized the bus stop and put the poster up themselves.