Video shows pickup truck slamming into, flipping SUV with kids inside in NJ 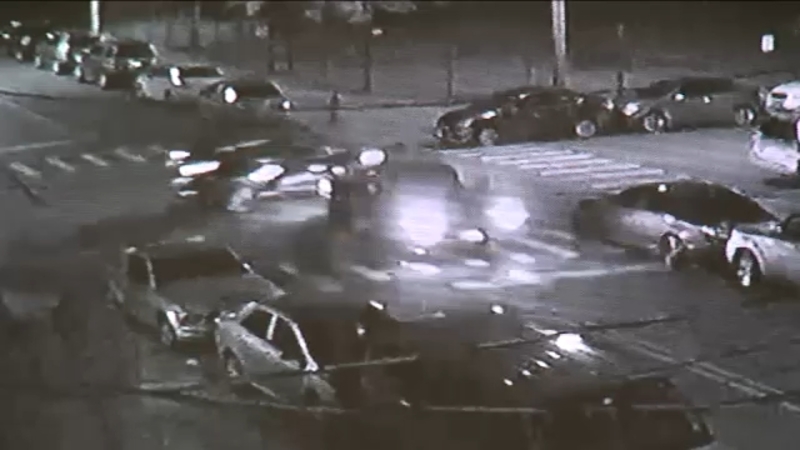 ELIZABETH, New Jersey (WABC) -- Surveillance video captured a wild scene in New Jersey Saturday night after a pickup truck ran a stop sign and slammed into an SUV with two babies in the back, flipping that vehicle over.

The six people inside the truck then fled the scene on foot as good Samaritans raced to help the trapped family.

It happened just before 11:30 p.m. on 6th and Fulton streets in Elizabeth, where the mother was driving for a food delivery service with her twin babies in the backseat.

First responders broke windows get the victims out.

"It was hard," said witness Brian Martinez, who was outside when it happened. "They had to break down the sunroof and then the back windows, because we didn't want any glass to get into the babies, that is a bit dangerous."

The children were said to be in child safety seats in the back of the SUV.

Martinez said he believed the children were OK.

At this point, it is unclear what charges have been or will be filed.

Police san an unlicensed driver was charged in the hit and run death of a teen on a dirt bike in Belleville, New Jersey.

Have a breaking news tip or an idea for a story we should cover? Send it to Eyewitness News using the form below. If attaching a video or photo, terms of use apply.
Report a correction or typo
Related topics:
elizabethunion countyhit and runchild injuredcrash
Copyright © 2022 WABC-TV. All Rights Reserved.
TOP STORIES
LIVE | Highland Park parade shooter charged with 7 counts of murder
What we know about 7 victims of July 4th parade shooting
Highland Park 4th of July parade shooting survivors speak out
3 dead, 24 wounded in July 4, overnight shootings across NYC
Exclusive: Man frustrated after house set on fire by illegal fireworks
LIVE | The Countdown
AccuWeather: Sunny and Warm
Show More
What to know if your flight gets canceled or delayed
Costco begins limiting gas sales to members only in NJ
NYC cracking down on 'ghost cars' with fake paper license plates
Gov. Murphy signs sweeping gun safety law in NJ
Woman hit in the face with firework in NJ, has severe eye injury
More TOP STORIES News