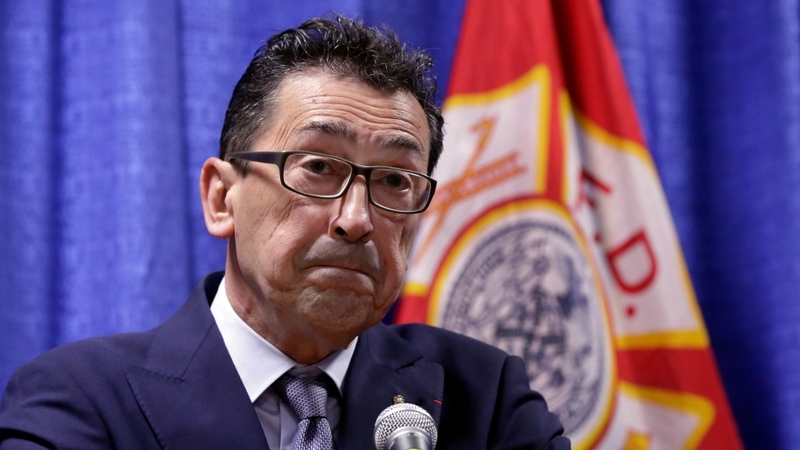 Commissioner Nigro is the fourth longest-serving Fire Commissioner in department history, and one of only six individuals to hold every rank in the Department.

"Dan and I have had an amazing relationship over our long careers in public service," Mayor Eric Adams said. "He's a tireless champion for New Yorkers, and a friend who I've leaned on time and again. From overseeing the heroic 9/11 rescue and recovery efforts to leading the FDNY's unwavering response during the pandemic, Dan has worked tirelessly to protect all New Yorkers. New Yorkers, whether they know it or not, are all safer because of the work he's done and owe him their thanks. Dan defines public service and will be deeply missed by me and the entire department."

Nigro was appointed the 33rd Fire Commissioner in June of 2014, and he oversaw the FDNY's response to the COVID-19 pandemic, including the highest period of medical calls in New York City history and the creation of a vaccination program for FDNY members, city employees, and homebound New Yorkers.

During his tenure, the department executed a recruitment campaign that led to the most diverse group of applicants in FDNY history, with more women and people of color now serving as New York City firefighters than at any point in the department's 157-year history.

"Since the day I raised my right hand 53 years ago and followed my father into the greatest fire department in the world, I have been blessed, privileged, and truly honored to serve the people of our great city," Nigro said. "On days of triumphant rescues and during times of unimaginable loss, the members of the FDNY - our firefighters, EMTs, paramedics, fire marshals, fire inspectors, and civilian staff - have always answered the call. They are extraordinary people and are deeply committed to protecting the lives and property of all New Yorkers. It has been the honor of a lifetime to serve as their Fire Commissioner."

Beginning in 1988, while in the rank of Battalion Chief, he served in several administrative positions at headquarters, including the Chief of Personnel and the Chief of the Bureau of Health Services, where he oversaw the medical care and treatment for FDNY members.

Upon his promotion to deputy chief in 1993, he returned to the field and served in Division 3 in Manhattan. A year later, he was appointed Deputy Assistant Chief and was instrumental in merging the Emergency Medical Service of the New York City Health + Hospitals Corporation into the FDNY. Following the merger, he became the chief in charge of EMS.

In 1997, he was promoted to Chief of Operations, overseeing all operations and training for more than 14,000 uniformed fire and EMS personnel.

After the September 11, 2001 attacks on the World Trade Center, he was appointed Chief of Department, following the death of his close friend, Chief Peter J. Ganci, Jr.

Commissioner Nigro was responsible for overseeing all rescue and recovery operations at the World Trade Center site, and the beginning of the unprecedented rebuilding of the department following the death of 343 FDNY members.

As Chief of Department, Commissioner Nigro held the highest uniformed rank, overseeing all major uniformed FDNY bureaus: Operations, Training, EMS, Communications, and Fire Prevention. He retired from the department in 2002 and returned in 2014 as Fire Commissioner.

Commissioner Nigro followed in the footsteps of his father, FDNY Captain Daniel Nigro, who served the department for 33 years. A native New Yorker, he resides in Queens with his wife, Lynn.

In this episode of Up Close, FDNY's commissioner joins us to uncover the lessons learned from the tragic and deadly fire in the Bronx last Sunday.