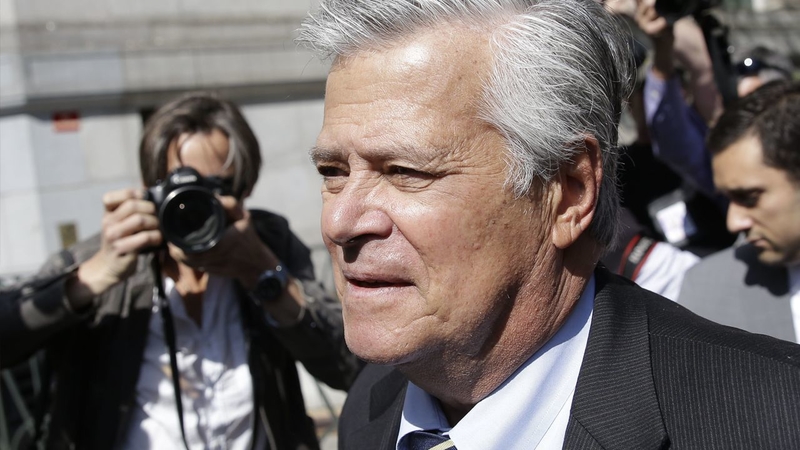 NEW YORK -- A once-powerful New York politician convicted of using his position as Senate majority leader to help his son extort hundreds of thousands of dollars was sentenced Thursday to five years in prison after each asked for mercy for the other.

Former Senate Majority Leader Dean Skelos and his son, Adam, were convicted last year of extortion, conspiracy and bribery in the latest of a spate of corruption cases that roiled Albany.

U.S. District Judge Kimba Wood gave the son 6 years in prison, saying he deserved more time because of his thuggish behavior during the scheme to force big companies to give him consulting and other work.

The judge imposed terms that were significantly lower than ones sought by prosecutors, noting that the dollar value in the case "pales in comparison" to that of former New York Assembly Speaker Sheldon Silver, who was sentenced this month to 12 years in prison in his $5 million bribery case.

But Wood told the 68-year-old Skelos: "The effect of your crime has much in common with him. ... You have caused immeasurable damage to New Yorkers' confidence in the integrity of government."

In a statement, U.S. Attorney Preet Bharara said there was no precedent for the "nearly simultaneous convictions of Sheldon Silver and Dean Skelos."

Democratic Gov. Andrew Cuomo said the sentences "show there is zero tolerance for those who use public service for private gain."

At trial, the government had accused the elder Skelos, a Long Island Republican, of strong-arming three companies with a stake in state legislation - a major real estate developer, an environmental technology company and a medical malpractice insurer - into giving his son about $300,000 through consulting work, a no-show job and a payment of $20,000. The scheme unraveled when investigators began recording phone calls between the father and son.

On one tape, jurors heard Adam Skelos insulting a supervisor on the no-show job by saying, "Guys like you aren't fit to shine my shoes" and threatening to "smash in" his face.

In another, the senator coached his son about the need for discretion amid the state capital's ongoing corruption scandal, saying, "Right now we're in dangerous times, Adam."

The dynamics of the father-son relationship took center stage at the sentencing hearing Thursday, with the men embracing at the defense table after addressing the judge.

Dean Skelos told the judge that the convictions had destroyed his reputation.

"It is heartbreaking to stand before you," he said. "Somewhere along the way my judgment became clouded."

He added: "I ask you to show mercy to Adam. ... He's a young man with two little autistic boys who need their father."

In a tearful apology, the 33-year-old Adam Skelos said he was deeply embarrassed and full of regret. He choked up when speaking about his father, saying, "I love him more than anyone in the world."

Addressing his father directly, he said, "You are sitting here because of me."

Assistant U.S. Attorney Jason Masimore countered by saying it didn't matter that the father and the son were blinded by their love for each other when they committed crimes. He said that would be like robbing a bank and then saying it was done for the benefit of the family.

The judge scolded Skelos for his role in the shakedowns, saying he "repeatedly threatened and pressured" the big companies to help his son, portraying him as destitute even while he was earning well over $200,000 annually.

And she interrupted attorney G. Robert Gage as he spoke on behalf of Dean Skelos to ask why the father did not reach out to his many friends to help find his son a job rather than use his position to extort companies.

"I wish I could answer that question," Gage said. "I certainly wish it had not happened."

Skelos and Silver, a Democrat, were among a group dubbed the "three men in a room" in Albany, a nod to the long-standing practice of legislative leaders and the governor negotiating key bills behind closed doors. They were the highest ranking of over 30 lawmakers who have left office facing criminal charges or allegations of ethical misconduct since 2000.