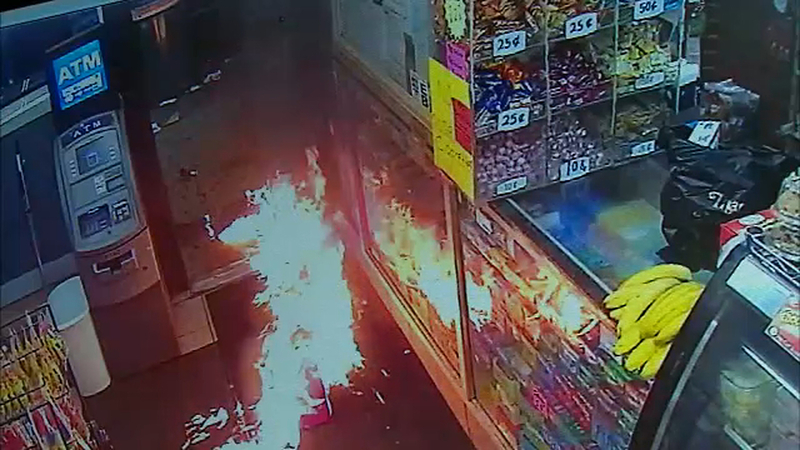 WAKEFIELD, Bronx (WABC) -- Police are searching for a man who tried to set a Bronx deli on fire after an altercation with one of the employees.

According to the NYPD, the dispute happened at about 6 a.m. Sunday on White Plains Road in the Wakefield section, where the suspect got into a verbal dispute with the 30-year-old employee that escalated into a physical confrontation.

The man reportedly lashed anti-Muslim slurs at the clerk and then threw beer at him, an affront for Muslims who do not touch alcohol. "He say you are a Muslim and terrorist, and threw beer in his face," said store owner Tarik Alomary.

The clerk then pushed the man out of the store.

Later that day, police say the same man returned to the store and spread the contents of a canister of flammable liquid in front of and inside the store and lit it on fire, then fled the scene.

The store employee was able to extinguish the flames with water.

He came back to his night shift Monday night after the arson attack. "All his focus to protect the store after he make the fire," Alomary said.

The clerk said he felt his life was threatened but he was not scared. ""He has family back home, wife and kid. Right away he start thinking about his family," said the owner.

No injuries were reported and the fire caused only minor property damage.

The owner says the man in the video is not a regular customer. We're told he was already drunk when he entered the store. The deli does not sell alcohol, for religious reasons.

The NYPD described the suspect as a black male in his 20's, last seen wearing a back hoodie, denim vest, and blue pants.