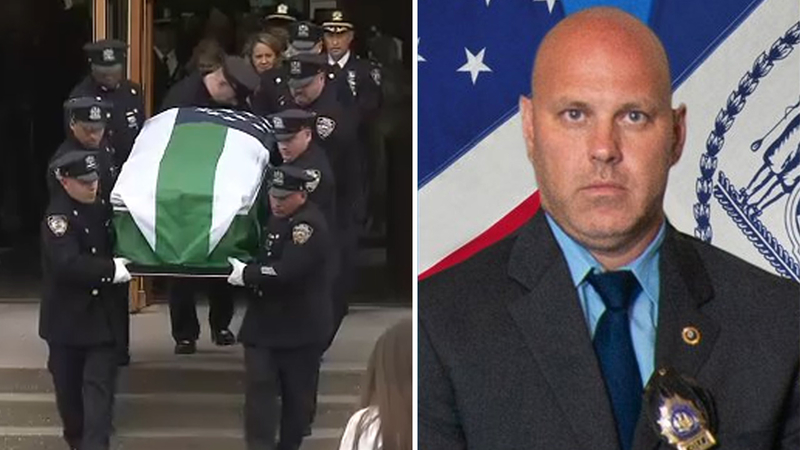 HAMPTON BAYS, Long Island (WABC) -- Family, friends and thousands of fellow police officers gathered on Long Island Wednesday to pay their last respects to an NYPD detective who was killed in the line of duty.

New York City police officers and those from around the nation joined loved ones to bid a final farewell to Detective Brian Simonsen, whose framed photograph adorned the altar opposite his grieving wife and mother while a memorial dedicated to the 42-year-old veteran detective continues to grow outside the 102nd Precinct.

Funerals services were held at St. Rosalie Roman Catholic Church in Hampton Bays, where Simonsen's casket arrived escorted by an NYPD honor guard and draped in the green, white and blue flag of the department in which he served.

He was hailed as a consummate law enforcer with people skills befitting his lifelong nickname: "Smiles."

Simonsen, a 19-year veteran, was killed last week by friendly fire while responding to a robbery at a T-Mobile store.

His supervisor, NYPD Sergeant Matthew Gorman, was also wounded in the shooting and was among the mourners attending his funeral.

Stacey Sager reports on the NYPD Detective laid to rest on Long Island.

"For nearly 19 years at the 102nd Precinct, Brian attended the roll calls, the birthday parties, the coffee runs, the weddings, the baby showers, and the funerals," he said. "We honor Brian's memory when we pick up where he left off."

O'Neill's voice caught as he recalled the details of the robbery call that brought Simonsen to the T-Mobile store and absolved fellow officers who he said will carry their grief with them for the rest of their lives.

"The two people responsible for Brian's death, the only two, are the career criminals who decided to go to that store on Tuesday night and commit an armed robbery," O'Neill said.

"Today, New York City is heartbroken," he said. "I think we can all agree we have lost one of our very best."

The mayor related a story about Simonsen soothing a crime victim who'd fought off an intruder. She cried on his shoulder so long that his shirt was soaked with her tears.

"It was never just a job for him," de Blasio said.

Simonsen and his wife, Leanne, a nurse, lived in Calverton, near the Long Island community where he grew up. Neighborhood kids knew him as "Uncle Brian."

"Smiles, he should have been the mayor. He was the glue...He just loved everyone," said Melissa Weir, who had known him since their high school days in Riverhead. "There's a lot of people who are hurting. Last night, I screamed in my car. You don't want any of our police to end up that way. But why him?...A good guy, such a larger-than-life personality. A stand-up guy."

Wakes were held Monday and Tuesday, and one of those in attendance was the widow of fallen NYPD Officer Weijian Liu, who said she wanted to pay her respects to Simonsen's family.

"I want them to know that they are not alone," Sanny Liu said. "We'll always be with them."

O'Neill said there is an internal review underway, and they are looking at the more than 40 gunshots that were fired by seven different officers that night.

Two suspects have been arrested and charged in connection with the robbery that led to Simonsen's death.

Christopher Ransom, 27, was arraigned Friday from his hospital bed on charges of murder, manslaughter, aggravated assault, menacing and robbery. He pleaded not guilty.

Jagger Freeman, 25, was arraigned Sunday on charges of murder, robbery, assault and criminal possession of a weapon. Police believe he acted as the lookout in the robbery.