Experts explain how to tell a real diamond from a fake 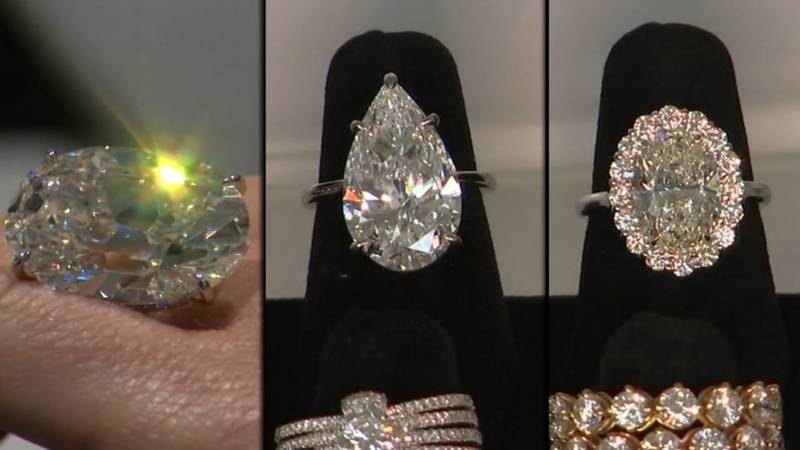 Diamond alternatives: How to tell the difference from natural and lab created stones

Valentine's Day is big day for jewelry, with consumers spending nearly $4 billion last year. However, a recent GMA investigation found that shoppers may not be getting what they thought they were buying.

Money can't buy love, but it can buy a ring, and for Molly Carlson, that was a big deal!

Her boyfriend Scott popped the question during a vacation in 2018, but he waited to buy the ring so they could pick the perfect one together.

When they returned from their trip, the couple bought what they thought was the perfect ring at a jewelry store at their local mall.

"I took it to another jewelry store and I said, 'What can you tell me about my ring?' And they told me, 'Well, I can tell you it's not a natural diamond,'" Carlson said.

As it turns out, Carlson's dream diamond was actually a diamond created in a lab.

"He just basically said, 'This is the style, this is the cut, this is the clarity.' But never once about lab," Scott said the sales person told him when he bought the ring.

The issue, according to the federal trade commission, is disclosure. Jewelers must clearly tell customers that it's man made before they buy any diamond that's not natural. So now, after concluding not every bling business is following their marketing and sales guidelines, the FTC recently sent warning letters to eight online jewelers that sell lab created and simulated diamonds.

"Three things that we're seeing," Reenah Kim with the Federal Trade Commission said, "is use of the term 'cultured' to describe the diamond. Use of the word 'alternative' to describe a diamond, and simply using a brand name next to the word diamond and not having additional language close by to make clear to the consumer that what they're buying is not in fact a mined stone."

One of the sites the FTC sent a warning letter to is Diamond Nexus.

On its site there are descriptions like "Nexus diamond alternative," which the company says that language is clear and customers understand they are not getting a mined diamond. The site also has a page that explains how the stones are made, but the FTC says that's not enough.

"Other terms we've seen are things like, 'diamond alternative,' which is especially ambiguous because it could refer to anything," Kim said.

Diamond Nexus said the FTC guides are outdated and they stand behind their language.

The company also told ABC News: "What we offer for customers is an incredible value for those who care about beauty and budget over chemistry or creation method."

So how can you be sure of what you're getting? Gemologist Antoinette Matlins said if it's a diamond you're after, ask directly if it was created in a lab and get that information in writing.

"Whether it's a laboratory diamond or a mined diamond, all of that same information should be on the report," she said.

Asking that specific question is something Carlson said she wishes she had done.