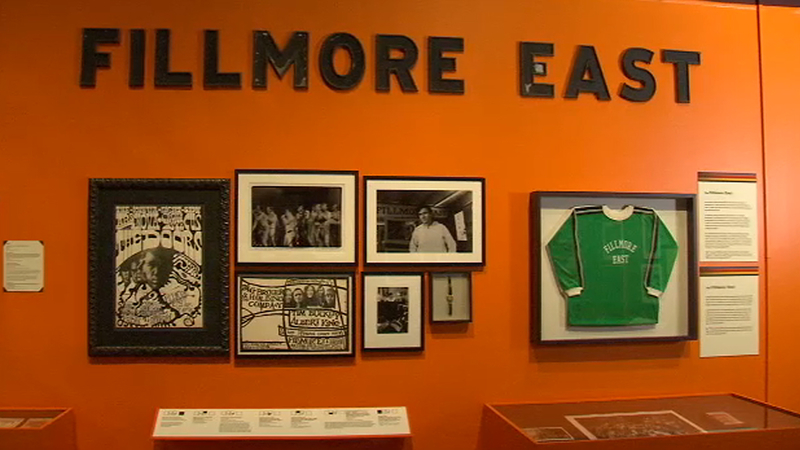 UPPER WEST SIDE, Manhattan (WABC) -- A new exhibit at the New York Historical Society on the Upper West Side takes visitors back in time before rock music became big business, and the focus of the new show is one of the guys who made that happen -- the late Bill Graham.

The man who staged a rock and roll revolution came to New York City as a refugee from the Holocaust, and Graham was adopted by a family in the Bronx before studying business at CUNY and putting what he learned to good use.

"Bill gave New York its rock and roll pulse in the Fillmore East, which was known as 'the church of rock 'n roll,'" Coordinating Curator Cristian Petru Panaite said.

The venue opened 52 years ago this month with a concert featuring Janis Joplin, and the new exhibit -- called Bill Graham and the Rock & Roll Revolution -- puts this in context for those born after the heyday of the famous venue.

Kids get their own guided tour.

As visitors stroll through the exhibit, they hear Graham's words via headset and selections from some of the best rock music he helped to promote.

Back in 2015, we talked to Amalie Rothschild, a photographer who was there in the 1960s.

"This was that very special time," she said. "Before the phenomenon of rock music became the mega bucks cutthroat industry it's become today."

A plaque marks the spot on the Lower East Side outside a bank where so much music once echoed.

"It was loud enough to make you deaf from 100 feet away," photographer Bill Green said.

The Fillmore East lasted just three years, from 1968 until 1971, as rock music had become big business and required a move to bigger venues. But Graham continued to loom large by promoting tours by The Rolling Stones and staging huge charity concerts.

"For him, it was all, I think, about surprising the audience and giving them the best experience possible," Panaite said.