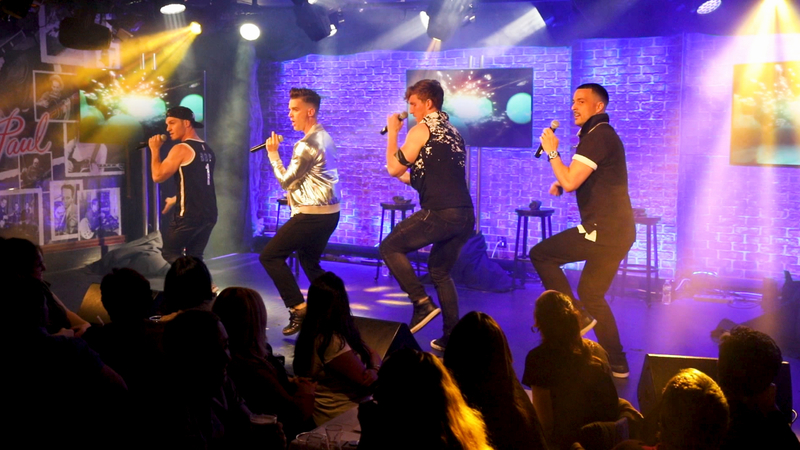 EMBED <>More Videos
MANHATTAN, New York (WABC) -- There's a moment at every party when a boy band song shuffles onto your playlist and instantly the room is transformed into a euphoric gathering of super fans.

Everyone, even the person you'd least expect, is singing and dancing along to the iconic sounds and fist bumps of this undeniable musical phenomenon.

From Backstreet Boys to the Beatles to One Direction, history has informed us of our inherent obsession with this music genre.

The members of the group switch out based on location, availability and show, but we sat down with Travis Nesbitt, Chris Messina, Kevin Raponey and Jesse Corbin. All four of these gentlemen are gay, but say this makes things easy.

"There is something inherently gay about a boy band," said Jesse. They can embrace who they are with no fear of judgement and the audience loves it.

In 2014, Travis Nesbitt had just finished an off-Broadway show called "Alter Boys" and he knew a bunch of Broadway actors who were out of a job.

He looked around and saw a bunch of talented gentlemen who looked like they could be in a boy band, so he created the group to keep the actors performing.

Utilizing talent from Broadway, The Boy Band Project creates entertainment based on a client's taste, demographic or desires for a specific event. They perform popular numbers that replicate the sound, dance moves and energy of the selected boy bands.

Most of the performances raise money for different causes. The Boy Band Project, will be raising money For BCEFA in their next performance is at the Iridium Jazz Theater on July 10th 2018 at 7:30 pm.