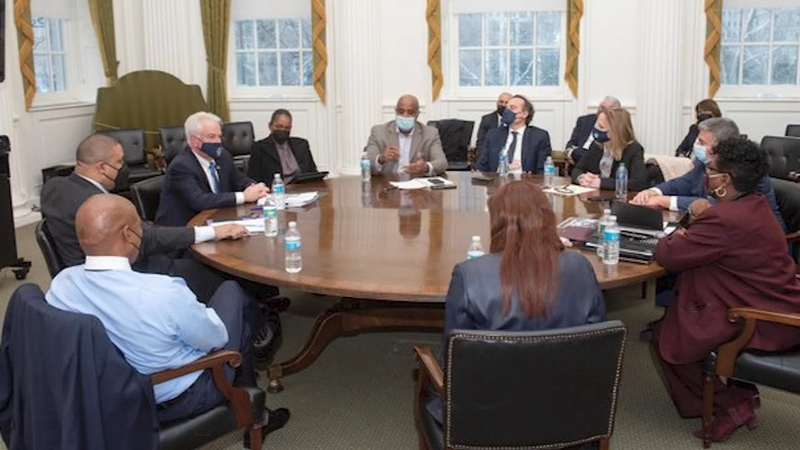 NEW YORK CITY -- Bullets flying inside a crowded Brooklyn shopping mall. Teenagers shooting teenagers with bystanders diving for cover. What was once uncommon-is happening every day in New York.

"I think yesterday was about trading off ideas," said Queens District Attorney Melinda Katz. "I think you need to prosecute drivers of crime. But at the same time, you need to make sure we have the services so the same people don't end up picking up the same guns."

In a joint statement, the mayor and police commissioner called first conversation "wide-ranging, candid, and productive."

"The purpose of the meeting was to discuss the mutually shared goals of keeping New Yorkers safe, particularly from the rising toll of gun crimes," the statement read. "They discussed ways that each office, the city, state, and federal partners could contribute to the fight against gun violence, as well as the ways they each could use their voice and platform to urge necessary changes to the system."

The shooting erupted after two groups got into a fight and appears to be gang-related.

Adams said they all agreed that safety and justice are not mutually exclusive and must go hand in hand. They also agreed to meet regularly.

This meeting comes as citywide, shooting incidents and shooting victims went up in January by 32%, and major crime went up by 38%. Fueled by increases in grand larceny, robbery, rape and felony assault.

Since January of last year, more than 800,000 additional riders have returned to the New York City subway system. And although subway ridership went up by 52% transit crime skyrocketed by 70%.

Several of the city's top prosecutors believe that judges should be able to take into account whether a suspect is a potential danger in deciding whether to release him on bail. But New York is the only state that forbids that. Katz says that needs to change.

"Right now, it's the risk of flight that judges consider, and that we are allowed to consider as well," said Katz.

Katz says closing off the pipeline of guns is critical. President Biden will meet with the Mayor, police officials and others on Thursday.

"He will be joined on the trip by Attorney General Garland to talk about the steps the administration has taken so far to reduce crime, gun crime, and how we can be a strong partner for New York City," said White House Press Secretary Jen Psaki.

Manhattan DA Alvin Bragg, who has only been in office a few weeks, has already seen a lot of pushback on his proposed policies, which include what he calls strategies to decriminalize poverty and the mental health issues driving many non-violent offenses.

Critics, however, have pounced on the new policy and procedure memo outlining which crimes would be downgraded or no longer prosecuted, like fare evasion.

"This is going to make us safer," said Bragg. "It's intuitive, it's common sense. I don't understand the pushback. We were specific. We said we were going to marry fairness and safety, and we laid out a specific plan. We put on the website, we put it in print."

Gov. Kathy Hochul, who has the power to remove Bragg, met with him last week to discuss his proposals. And said the meeting was productive

"You judge by the balance-someone's been on the job a very short time. I cut him some slack," said Hochul.