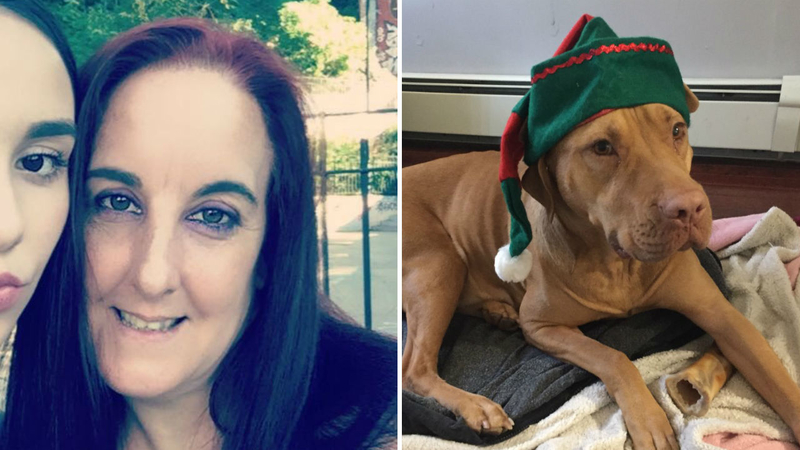 BROWNSVILLE, Brooklyn (WABC) -- The family of a woman who was attacked by a man with a machete while she walked her dog in Brooklyn is speaking out and grateful their loved one is OK.

The attacker was shot and killed by police Tuesday night as the incident unfolded on Dumont Avenue and Strauss Street in Brownsville.

Savannah Cruz nearly lost her mother to the crazed man. Darlene Duda, 50, was nearly hacked to death as she walked the family dog.

"I'm just so, so, so happy that my mom is alive, just so happy," Cruz said Wednesday.

It happened around the corner from their home when Duda was struck from behind.

"She fell to the floor and turned around and he kept hitting her head," Cruz said. "And then my dog, you know, tried to attack him, and he got my dog. So then my mom saw that he got my dog, and was like grabbing my dog like this which is why she has the defensive wounds like that because she was trying to protect my dog."

Their dog, Honey, was also badly injured but survived.

Police converged on the scene in minutes, and when the suspect refused to drop the knife, he allegedly charged at the officers and was killed.

"All I heard was a single gunshot," neighbor Paulette Bazil said.
Bazil was one of several neighbors who rushed to help Duda.

"It literally looks like somebody took a bucket of blood and just poured it on her and my dog," Cruz said. "Like that's how like bloody it was."

Cruz says her mom has broken bones and deep gashes on her hands, arms and her head. She will require surgery to repair tendons in her wrist.

The suspect is from the Bronx. It's still not clear what he was doing in Brownsville. Police believe it was a random attack.

"They don't know each other, never seen this kid, like nothing," Cruz said. "When something like this happens, you know, it's just very traumatizing -- to hear that my mom really felt like she was going to lose her life."