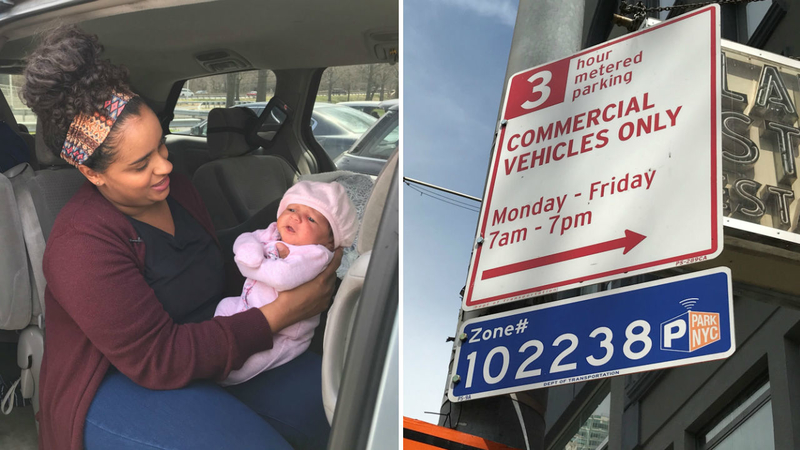 MIDTOWN, Manhattan (WABC) -- A mother of four was stunned to receive a parking ticket in Manhattan this week while breast-feeding her hungry 3-week-old baby.

Guillermina Rodriguez, 30, got the $115 ticket while parked Thursday morning on 8th Avenue between West 30th and 31st streets.

She said Friday she knows she was forced to pull into a commercial zone, but it became urgent and she felt she had no choice.

"I'm like almost crying because she's crying and all I wanna do is pull over so I can attend to her," Rodriguez said.

Rodriguez decided to pull over to breast-feed after dropping her husband off for an appointment and getting stuck in a 45-minute traffic jam on her way downtown.

Her baby, Ileana, was crying from hunger and Rodriguez felt like she had to pull over to feed her.

She said within two minutes of getting in the backseat, an officer pulled up with a tow truck.

"He just literally took out the tow truck, he was gonna tow the car, without even looking in there," she said.

With Ileana still latched on, Rodriguez sprang up front to honk her horn. Fortunately the officer didn't tow her, but she says he did squint through her tinted windows.

Rodriguez said she wishes the officer showed more compassion. She was so frustrated that she contacted a breastfeeding advocate from La Leche League of New York.

"As a society, we need to hear babies crying and answer them. And I don't think she deserves a ticket for that," Gilman said. "I think she deserves understanding, and the police officer should have said, 'Sure, I'll give you a couple of minutes.'"

Rodriguez plans to fight her ticket.

Eyewitness News has reached out to the NYPD for comment and is waiting to hear back.