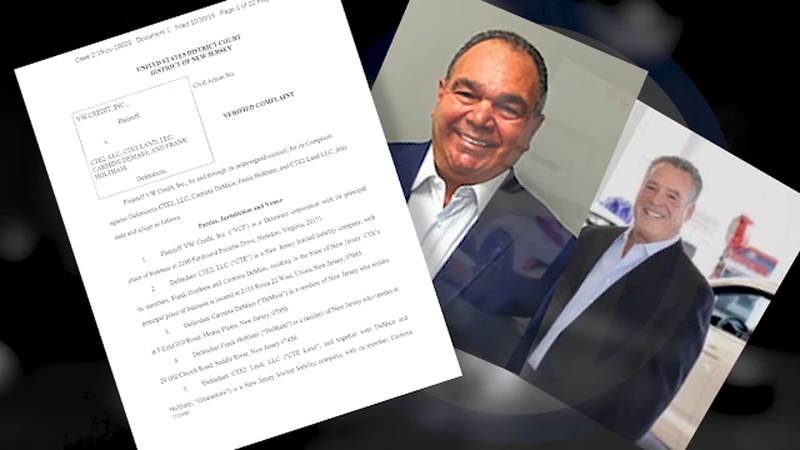 Ex-employee speaks out about 'disgrace' of defunct car dealership

UNION, New Jersey (WABC) -- 7 On Your Side brought you the story of a New Jersey dealership that shut down months ago after reneging on customers, leaving them out tens of thousands of dollars and forcing them to pay off cars they didn't even own anymore.

They're called "rollover loans." It's where you buy a new car and the dealership accepts your trade-in, agreeing to pay off its remaining financing.

After our initial story ran, several other customers came forward and so did a former employee, offering an eye-opening, insider's view of that dealership. He asked we conceal his identity because he fears reprisals for telling his story

"I think it's a disgrace. I think what they did to the customers is a disgrace," he said.

The former employee of the defunct dealership VW of Union says he's speaking out:

"Because I don't think it's right what we did to the individuals. Everything should have been take care of and there shouldn't have been any problem with making customers pay us and then ruining their credit," he said.

The longtime salesman is referring to more than a dozen customers he says got stuck owing money on cars they had already traded in.

"Now we're paying off two loans on a new vehicle and one we don't own anymore," said customer Teresa Dovale.

Last fall, Dovale bought a new Golf at VW of Union and traded in her Subaru. The dealership agreed to pay off more $12,322 in financing to her bank, but never sent the check -- now she's still making payments on her old car.

She tracked her old Subaru to Marissa Baranski's driveway, who bought it at VW of Union.

"It's outrageous. We're both making payments on it," Baranski said.

"It's called double dipping," said the former employee who claims it was going on for months at the dealership.

He said the dealership even kept a spreadsheet of when angry customers would call repeatedly. We found 13 pay-outs -- totaling $164,842.06 hadn't been made weeks after customers expected payoffs.

"They would be coming in screaming on the phone or in person. Sometimes we would call the police," the employee said, who claimed he had "no idea what they were doing with the money."

7 On Your Side asked VW of Union's owner, Carmine De Maio, called us after we left a a message at his home.

In October, Volkswagen Credit sued both, alleging their companies defaulted on more than $23 million in loans to VW.

VW of America said the Union dealership was an independent business and it had no knowledge of their business practices, however, after our repeated calls, said it was committed to making things right .

"They made the pay-off, they paid off the trade-in," Dovale said, emerging from a dealership in Linden where representatives from VW headquarters in Michigan set up shop to help customers.

Dovale was made whole, recouping $12,322 on both the trade-in and the double payments she had been making just in time to celebrate a New Year with her young family.

"We are very grateful to you Nina, we are very lucky to have people like you and that you're willing to help us," the family said.

VW of America said customers affected by the dealership closure should contact them at (800) 428-4034.

Email 7OnYourSideNina@abc.com, or contact Nina on her Facebook page or tweet her at Twitter @7OnYourSideNY! You can also call the 7 On Your Side Hotline at 917-260-7697 or fill out the form below.
Report a correction or typo
Related topics:
personal financecar7 on your sidescam
Copyright © 2021 WABC-TV. All Rights Reserved.
7 ON YOUR SIDE
Passport backlog has travelers scrambling, frustrated
Tabernacle damaged by out-of-control NYPD SUV gets payment
Should you Buy Now Pay Later with purchases?
7 On Your Side helps customer avoid hot tub hustle
TOP STORIES
Firefighters battling apartment fire in Carteret
Investigation underway after 3 found dead inside Long Island home
Woman struck over the head with kitchen pot, has walker stolen
Mother & child treated for 'significant' injuries in barbershop crash
Air, water patrols boosted after 2 days of shark sightings on LI
Sleepaway camp says 31 campers under 12 tested positive for COVID
Immigrant essential workers rally in Manhattan for path to citizenship
Show More
25-year-old woman arrested after 4 Asian victims assaulted
AccuWeather: Humidity on hold
New law requires NJ middle schools to teach about voting
Morgan Wallen speaks out on using a racial slur in 'GMA' interview
'Indians' no more: Cleveland finds new name for baseball team
More TOP STORIES News