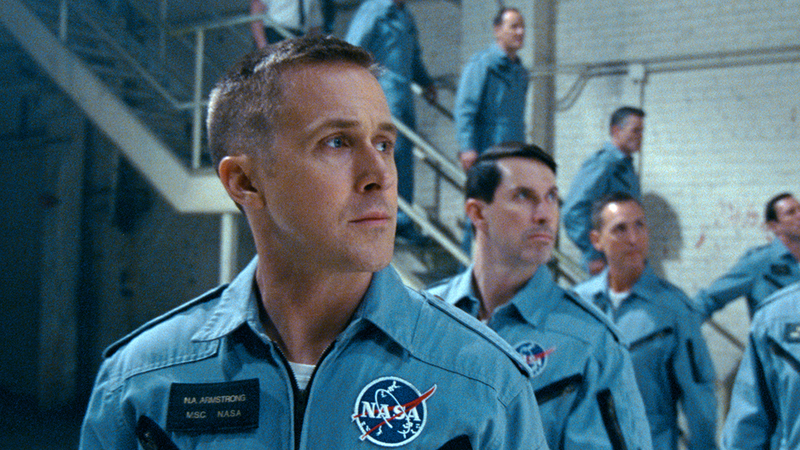 Next year marks the 50th anniversary of the lunar landing, when NASA's Neil Armstrong became the "First Man" to walk on the moon.

Ryan Gosling plays the late astronaut in a new movie opening Friday, and I really need to use only four words for this review: "Go see 'First Man.'"

But I guess you need to know why -- so here goes:

"First Man" proves worthy of the fearsome task at hand. A reporter asks Armstrong at a press conference shown in the film, "Neil, if this flight is successful, you'll go down in history. What kind of thoughts do you have about that?"

The laconic astronaut simply replies, "We're planning on the flight being successful."

This film is a true testament to the courage of all those who pursued what was, arguably, the most dangerous mission of the 20th century, and the passage of time has made us forget just how difficult it was to reach the moon.

As Kyle Chandler's NASA character explains, "We've chosen a job so difficult, requiring so many technological developments. We're gonna have to start from scratch."

Success was never assured, and the cost was high in dollars spent and lives lost while getting ready for the mission.

After three of his colleagues die, Armstrong's wife, played by Claire Foy, reminds him, "Those kids don't have a father anymore. So you're gonna sit the boys down, and you're gonna prepare them for the fact you may never come home."

The wife of the "First Man" makes him live up to his responsibility as a family man, all the more important because the couple had lost a child to illness. This comes up when Armstrong, a test pilot, is being considered for a job as an astronaut early in the film.
"I was sorry to hear about your daughter," one interviewer says, to which Armstrong, stone-faced, replies, "I'm sorry, is there a question?"

Clearly, the reserved hero was the opposite of demonstrative, yet Gosling never makes him dull. His restrained approach mirrors the real guy, if not in bravery, then certainly in dedication.

It's a tribute to Damien Chazelle's skill as a filmmaker that he manages to create so much tension around a tale -- that we all know ends well.

Watching "First Man," I felt like I was along for the historic ride, and so did Nicole Harris, who I took along for a second opinion. She says she was "white knuckling it" during the opening, and action sequences she called "intense".

Both of us were struck by how down'n dirty NASA was back in the day: lots of rust, dented metal, and chipped paint. It's a wonder how men made it all the way to the moon!

This is the closest most of us will ever get to going into space, so I urge you to go and see this movie on the biggest screen you can find.

My hope is that Oscar voters, who often reward showy performances, remember Gosling's quiet power when it comes time to hand out nominations for this year.