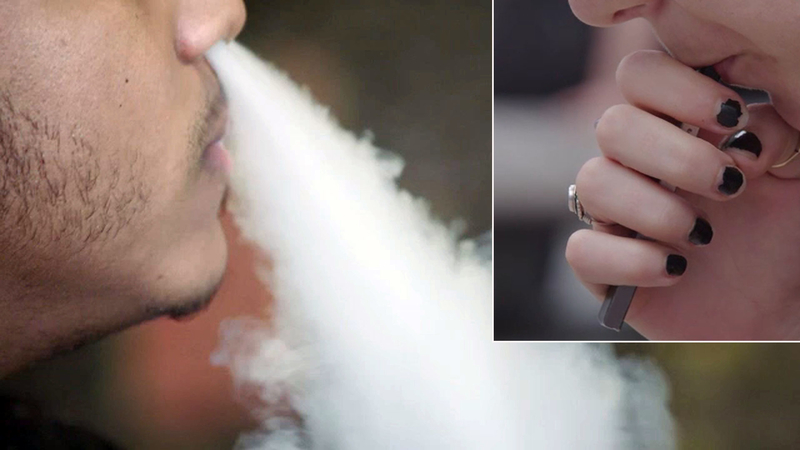 NEW YORK (WABC) -- The New York City Council passed a measure Tuesday that will make the sale of flavored e-cigarettes and liquid for vaping devices illegal.

The City Council voted Tuesday 42-2 to ban all e-cigarette and e-liquid flavors except tobacco. The ban goes into effect on July 1.

San Francisco is the only other large city with a ban after voters approved the measure, and New York City will be the first major city to impose one.

Speaker Corey Johnson said flavored e-cigarettes have lured too many young people to what he calls the dangerous habit of vaping.

"New York City cannot wait any longer for this ban, we are taking action today to tell the industry to back off our children who are vaping in large part because they are lured by these flavors, we need to protect them from flavored e-cigarettes," Johnson said.

There were competing protests outside City Hall ahead of the vote, and the tobacco industry has said bans like this are a setback in tobacco harm reduction efforts. Small shops around the city have said the ban will seriously impact their business.

Vape shop owners threw money from the City Council balcony on Tuesday to blast the Council for doing nothing about regular cigarette smoking and targeting people who they say might need to vape.

Johnson uses mint-flavored e-cigarettes. He says they have helped him move away from smoking a pack a day, but he voted in favor of the ban.

New York state previously attempted to impose a temporary ban on flavored e-cigarette products, but the move was blocked by a judge.

New York City has had two deaths attributed to vaping since October, including a 17-year-old from the Bronx.

"I'm certain there are some people who benefit, but the problem we have is, we know that these flavors are being used to systematically hook children," Mayor Bill de Blasio said. "And we know people are using other products, and we know we have a health crisis now."

On the federal level, while President Donald Trump once vowed to crack down on e-cigarettes, he is now considering raising the age to 21.