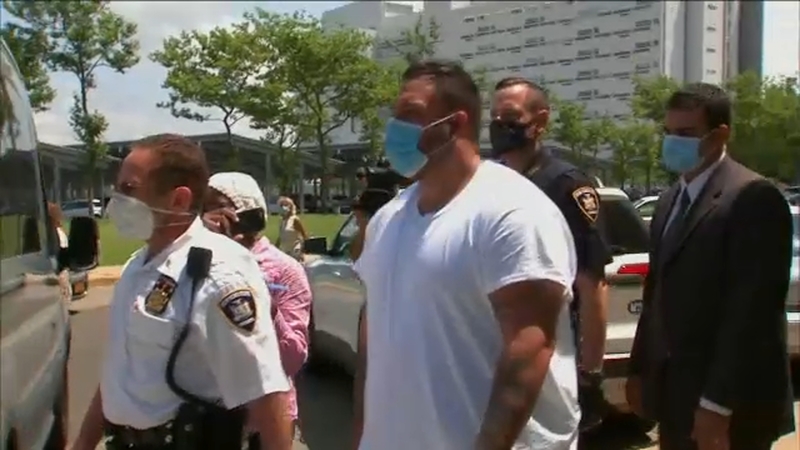 Joseph Recca, 28, pleaded guilty to manslaughter and other charges.

"The Suffolk County District Attorney's Office is aggressively investigating and prosecuting drug dealers, particularly those who are causing overdoses, and Joseph Recca is the latest example," District Attorney Tim Sini said. "Today, my office and the court held him responsible for the death he caused. What makes his case unique and particularly troubling is the fact that he was selling drugs while also serving as a police officer. We will not tolerate drug dealers peddling poison in our communities, and our message today is that no one is above the law."

He was arrested after the overdose victim's mother, Jessica Bornschein, found text messages between Recca and her son Ryan after his death.

The investigation revealed evidence that Recca had sold the victim fentanyl pills and had been in proximity to the victim at the time of the final sale prior to the victim's death.

The text messages recovered also included an exchange that occurred on Aug. 29, 2019, in which Recca was texting the victim about payment for a previous drug sale. The victim texted Recca that he was in the hospital recovering from a non-fatal overdose. Recca replied, "So when will you have the money you think."

Further investigation, which was conducted in collaboration with the NYPD's Internal Affairs Bureau, revealed that Recca was engaged in a conspiracy with two other individuals to sell narcotics.

The investigation involved physical and electronic surveillance as well as court-authorized eavesdropping, and during the course of the investigation, Recca used official NYPD resources to run the license plate numbers of vehicles he believed were following him in furtherance of the drug trafficking operation.

On July 21, 2020, Recca was arrested and found in possession of approximately 100 pressed fentanyl pills marketed as Oxycodone. Members of the Suffolk County District Attorney's Office, Suffolk County Police Department, and the NYPD Internal Affairs Bureau also executed a search warrant at Recca's home, which resulted in the recovery of more than $10,000 cash.

Recca, who had been employed as an NYPD officer since 2017, resigned from the department following his arrest in July 2020.

The prosecutions against Recca's two alleged co-conspirators are still pending.

This is the fourth case prosecuted by the Suffolk County District Attorney's Office in which a defendant is convicted of manslaughter for causing a fatal overdose.
"While we continue to be leaders in the state on this front and will continue to be innovative to do what we need to do to hold these criminals accountable," Sini said. "We need legislation by the state to create a 'death by dealer' statute. We need to send a clear message that when you sell drugs and you kill people, you are responsible for those deaths. We are all on notice that these drugs are deadly. How many people need to die before we pass common sense legislation at the state level?"