Exclusive: An inside look at how police train for emergencies on the George Washington Bridge 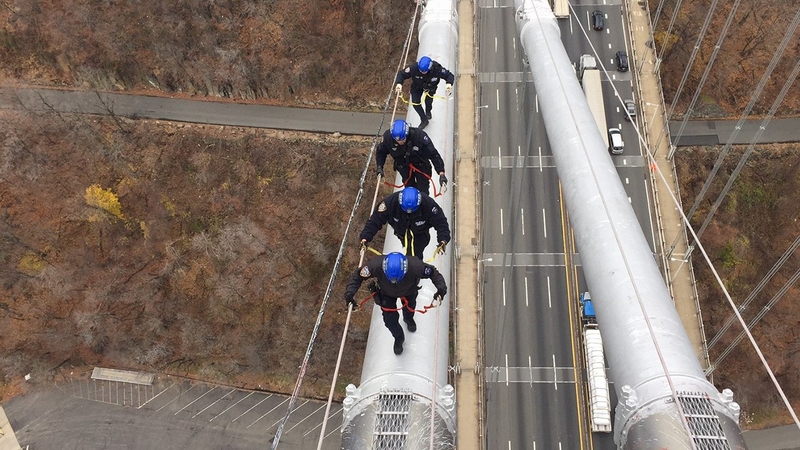 Exclusive: An inside look at how police train for emergencies on the GWB

NEW YORK (WABC) -- The Port Authority Police Department held a training session to help the NYPD and it's ESU officers protect the George Washington Bridge, the busiest suspension bridge in the world.

It's a prime terror target and it's a risky job keeping it, and us, safe.

We went side by side with the officers for an exclusive inside look at their training.

Putting their lives on a very precarious line, police officers with the Port Authority and the NYPD train in unison on the George Washington Bridge in preparation for the next emergency.

"This is the busiest bridge in the world and we know it's a terrorist target and that's why it's important to train with the NYPD," said Port Authority Police Assistant Chief Steven Rotolo.

The NYPD's Emergency Service Unit, which responds to some of the most dangerous emergencies, is learning from the Port Authority's ESU officers about the bridge and its characteristics as they begin their climb.

Photos of the training


"We try to train as much as we possibly can in any of our various disciplines. So high angle technical rescue is one of them," said Sgt. Antonio Perzichilli of the Port Authority Police.

That was evident back in late October when a man scaled to the top of the north tower.

Threatening to jump, Port Authority and NYPD officers responding were able to yank him back to safety.

Sgt. Perzichilli has been with the Port Authority's ESU unit for 12 years.

"You work at some extreme heights," he said. "It just takes an acclimation, and you know training is what prepares you for that."

360 video of the training

While the officers were making the treacherous climb up the cabling, we took an elevator to a catwalk that winds its way through the large steel girders and opens up to the lanes of traffic below.

The officers, now near the end of the climb, used the time to work on procedures.

"Our ESU goes to their SDS school so we figured this would be a great opportunity before the holidays to train and familiarize them with the bridge," said Rotolo.

Once at the top, the officers got together and were able to share safety strategies and various methods of handling emergencies on this massive structure.

"We handle access issues. A familiarity with the facility," said Perzichilli. "There is some key infrastructure needs to be handled. We need to prepare for that, so this gives us a good acclimation to the facility itself."

In a post 9/11 era, joint training is becoming the nor, police officials say, increasing the value of protecting the public.