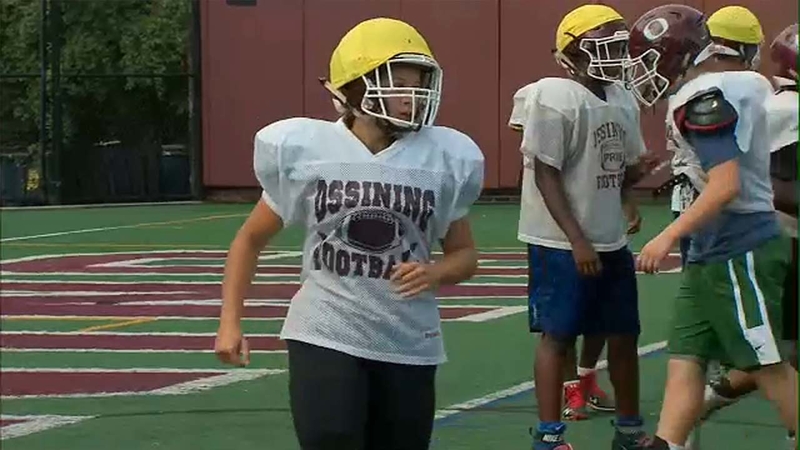 OSSINING, Westchester County (WABC) -- One student is breaking barriers and charging into battle on the gridiron, becoming the first female to play varsity football at a New York high school.

Cassie Rios is a wideout for Ossining High School in Westchester County.

Rios said after two weeks, they treated her like how everyone else was treated. Her execution on plays and unwavering commitment has caught the attention of and drawn praise from her coaches.

"Going through double sessions of football with the equipment on, dragging tires down the field like that...she's a tough kid," said Dan Ricci, head coach of Ossining High School's varsity football team.

Rios is a two-sport pioneer. She was on the wrestling team last year, and it was during the off-season weight training that she decided to give football a try.

"None of us thought she was going to make it past preseason," teammate TJ Komosa said. "We thought she would give up when pads were put on, but she didn't. She stuck with it. She always wants to practice, which no one else wants to do, so it's fun to have her."

Rios has held her own through the practices, hitting and running. Despite suffering from asthma, her inhaler is never too far from reach.

The experience has been so positive, the senior hasn't ruled out playing in college.

"You've won a game, everyone's celebrating," Rios said. "Or even before you go out in a game, you get all amped up, getting that adrenaline rush. That's the best feeling ever."