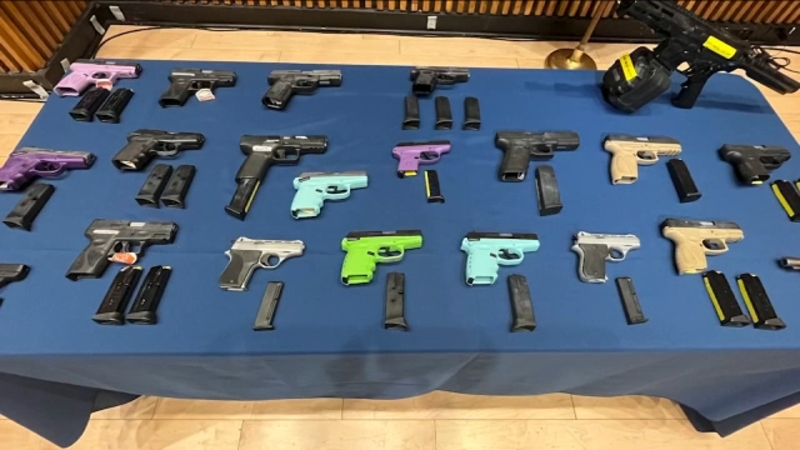 Colon allegedly hauled dozens of guns along the "Iron Pipeline" from North Carolina to New York City, according to prosecutors.

Colon allegedly sold 36 guns to an undercover NYPD officer on three separate occasions, according to the Manhattan District Attorney's office.

All of the gun sales were conducted in broad daylight.

He also allegedly recruited several people he knew in Rocky Mount, North Carolina to obtain permits and purchase firearms for him, according to court documents.

Conversations recorded through an eavesdropping warrant captured Colon discussing the ease of obtaining firearm permits in the state of North Carolina.

According to court documents, when one purchaser asked if he could get his permit with a misdemeanor Colon said, "It possible. It ain't like they won't deny you."

The weapons sold to the undercover officer were worth over $40,000.

Investigators say they also used wiretaps to uncover more of Colon's plan to smuggle and sell guns in the city.

"Since I took office, one of our main priorities has been to prosecute gun traffickers who bring dangerous weapons into our state," said Manhattan District Attorney Alvin Bragg. "This joint investigation makes clear that we will proactively work with our law enforcement partners to hold accountable those individuals who are feeding the gun violence in our city."

Colon had five semi-automatic pistols and an AR-15 style assault rifle with a high capacity magazine in his possession when he was arrested in May, according to the Manhattan DA.

He was indicted in the New York State Supreme Court for several crimes including the criminal sale of a firearm and criminal possession of a weapon.