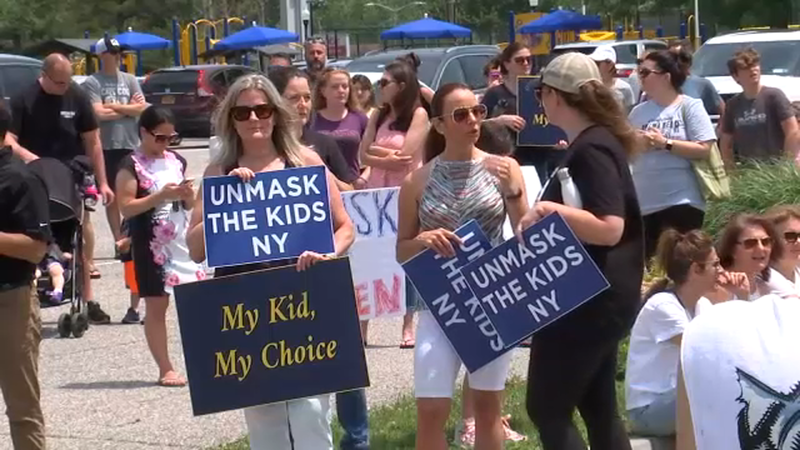 MASSAPEQUA, Long Island (WABC) -- School board members and parents in the Massapequa School District held a rally on Tuesday afternoon denouncing what they called threats New York State officials made to the district regarding the district's decision to be mask-optional on Monday as detailed in a letter to the Centers for Disease Control from the New York State Health Commissioner.

The group shouted "Bully" as they talked about New York Governor Andrew Cuomo during the rally at John J. Burns Park in Massapequa Park.

According to those with the Massapequa School Board, the district superintendent, in a phone call with state officials after Friday's letter from New York State Health Commissioner Howard Zucker to the CDC, asked what would happen if the district did not follow certain COVID restrictions.

Jeanine Caramore, Vice President of the School Board, said state officials threatened the district by saying the state would force the district's students into remote learning, remove School Board members, terminate the Superintendent of Schools and more.

"And even contacting our insurance company to tell them they shouldn't cover us," Caramore said.

Jordan Bennett, a spokesperson for Cuomo, told Eyewitness News in a statement, after Friday's letter the "chamber" talked to a number of school districts and the Massapequa School District asked about "potential penalties for disregarding certain COVID-related restrictions."

"The district's superintendent was provided with the information and she thanked us. Attempts to make this anything more is outrageous and - frankly - a lie," he said.

Eyewitness News tried on Tuesday to speak with Massapequa Superintendent Lucille Iconis, but was told through the district's public relations company, Syntax Communications, that the superintendent would have no further comment.

Massapequa, along with the Sachem School District and the Patchogue-Medford School District, decided to go mask-optional on Monday due to Zucker's letter on Friday which advised the CDC that if the state did not hear from the CDC by Monday, all schools in New York State would be mask-optional.

Each of the three school districts held emergency school board meetings over the weekend and voted to follow Zucker's guidance.

Following Cuomo's announcement on Monday afternoon that the CDC advised the state that masks should continue to be worn inside school buildings, the three school districts reversed their decisions.

Those with the Patchogue-Medford School District told Eyewitness News they did not have a conversation with state officials like the one had by Massapequa.

Those with Syntax said the Sachem School District did not have a similar conversation with state officials.

Nassau County Executive Laura Curran said on Tuesday since the vaccination rate in Nassau County is 76 percent, school districts should be able to make their own mask protocols.

"I really think school districts should be empowered to make this decision for their communities," she said.

Massapequa High School Sophomore Alexa Blejec cried at the rally as she talked about what it felt like not to wear a mask to school on Monday.

"I saw life everywhere," she said in tears.

Massapequa School Board President Kerry Wachter said her kids came from home school Monday and told her they could finally breathe as they walked up the stairs at school.

"The data shows that these masks are not needed right now," she said.

Parents in Massapequa said at the rally they will keep fighting until their kids no longer have to wear masks in school.

"There are states, there are countries that have been unmasked," said parent Beth Henry. "Look at that data. Kids are not sick. They are not dying. We do not need this."