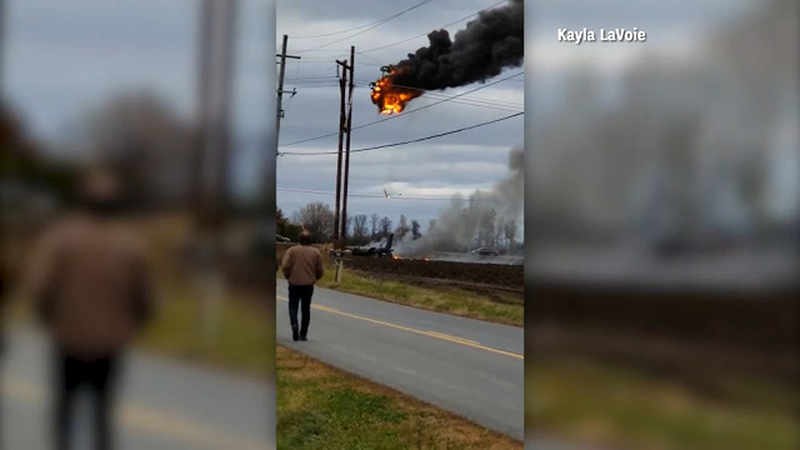 BEEKMANTOWN, New York -- Authorities are investigating the cause of a fiery helicopter crash in northern New York state that killed two and injured two when the aircraft hit power lines and burst into flames while conducting installation work.

The National Transportation Safety Board and Federal Aviation Administration and National Traffic Safety Board on Wednesday sent investigators to the crash scene in Beekmantown, about 20 miles (32 kilometers) south of the Canadian border.

State police said the 1981 Aerospatiale AS355F2 helicopter crashed after hitting power lines along a rural road about 4:15 p.m. Tuesday. Authorities said the pilot and a passenger were killed and the co-pilot and a second passenger were injured.

Troopers said Benjamin McAllister, 30, of Hopkinton, and co-pilot Scott Fabia, 34, of Hyde Park, were injured and remained at the hospital in nearby Plattsburgh for observation.

Cellphone video taken by witnesses showed the burning wreckage tangled in the wires before it fell about 40 feet to the ground. Part of a pulley system being used by the helicopter crew to install a fiber optic line remained attached to a power line.

Witnesses told local media that all four men in the helicopter jumped out after the helicopter hit the lines near a utility pole, landing in a plowed farm field across the road from a nearby home. Emergency officials said first responders pulled the men away from the burning wreckage stuck above them.

The New York Power Authority said the men on board worked for Northline Utilities, a locally based contractor that inspects and maintains power lines. A woman who answered the phone Wednesday at headquarters in AuSable said the company is cooperating with investigators and will not answer media questions at this time.