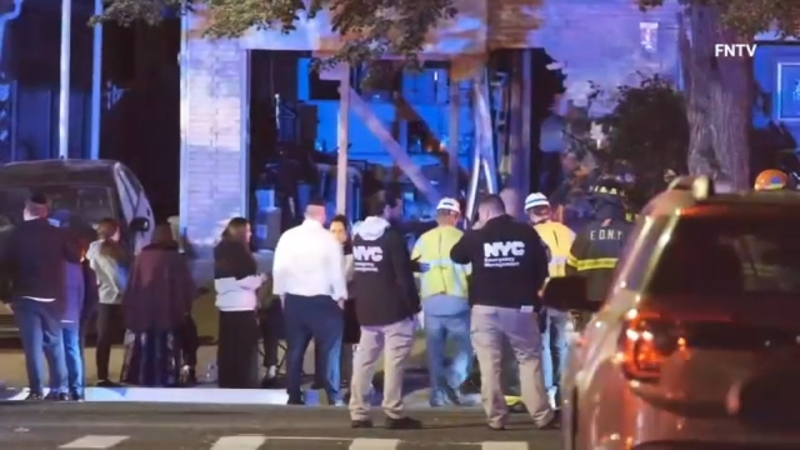 WILLOWBROOK, Staten Island (WABC) -- Police on Staten Island are investigating a hit and run after a couple awoke to a loud bang and found a hole in the front of their home.

Authorities say the car, believed to be a white 2020 Honda Pilot, slammed into the front of the house on Fields Avenue in the Willowbrook section just after 12:30 a.m. Monday.

The homeowner, who did not want to be identified, said he and his wife were sleeping at the time and were jolted awake by the noise.

Lighting birthday candles for a 100-year-old can be a fire hazard, but Wilbur Hutchins is no ordinary centenarian. He is a retired FDNY lieutenant.

They found the hole, but not the vehicle after the driver apparently fled the scene -- leaving the license plate behind.

No one was hurt in the home, and the family was permitted to stay the night.

Neighbors, many of them observant Jews who were awake for the holiday, were shocked at the news.

"It's a terrible story," neighbor Olivia Pavis said. "I feel terrible for the people that it happened to, and I just hope they find the guy if they haven't already."

The homeowner, who has lived in the house for 35 years, said he believes the incident was done on purpose.

He said he doesn't know the motivation, but he has no reason to believe it's a hate crime.

"I don't know what condition he was," he said. "Right now, (we're) indifferent. What am I going to do? We keep on going. My wife feels a little worse, but it's OK, she will get over it."

Police were searching for the car.