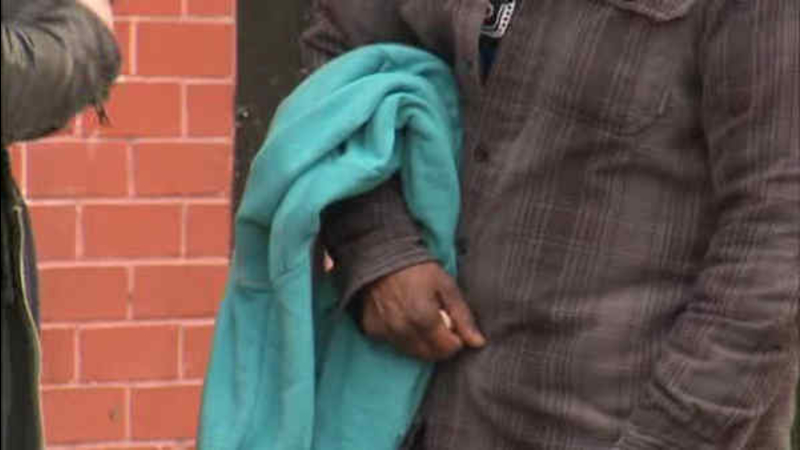 Hoodies for the homeless

NEW YORK CITY -- Mayor Bill de Blasio announced Thursday he is launching a sweeping initiative to combat the persistent problem of homelessness in New York City, ordering teams to do a daily canvass of every block of an 8-mile stretch in Manhattan to reach out to those living on the street.

The new program, announced at a high-profile speech to a major New York business group, is the latest in a series of moves by City Hall meant to show that it is urgently combatting the homelessness crisis after taking months of criticism that it was slow to address the problem.

The new Home-Stat program will deploy teams from the city's Department of Homeless Services to walk every block from Canal Street to 145th Street, a prime stretch of Manhattan where most of the estimated 3,000 to 4,000 street homeless are found. They will be tasked with engaging the homeless to offer services and urge them to seek shelter.

Tim Campbell from the Homeless Coalition visits Eyewitness News to talk about the new outreach plan:

"The truth is that no city in this nation has cracked the code and figured out how to solve this crisis," the mayor said in a speech to the Association for a Better New York. "But Home-Stat will be the most comprehensive street homelessness outreach effort ever deployed in a major American city."

De Blasio has made clear he believes the problem predates him and says that a shrinking amount of affordable housing is largely to blame for the rise in homelessness. Beyond those on the street, another 58,000 people live in the city's shelters, near a record-high.

The program launched immediately and will be fully operational by March.

It was applauded by several advocacy groups. Mary Brosnahan, head of the Coalition for the Homeless, said the plan should "at long last, bring thousands of homeless New Yorkers in off the streets and into permanent housing."

Police Commissioner William Bratton added he would propose legislative modifications that would give police officers more leeway to deal with the homeless. For instance, the law currently prohibits begging within 10 feet of a bank ATM; Bratton wants that expanded to ATMs found in bodegas and other stores.

The new program is part of a sudden full-court press by the de Blasio administration on the homeless. As recently as August, the mayor downplayed the issue, accusing the media of focusing on a few high-profile instances of street homelessness.

"I'm not sure if the attention that's been given is proportionate to what's happening," he said then. "I think it's caused people to be more and more concerned."

But as the homelessness numbers rose - and the mayor's poll numbers began to sink - City Hall has aggressively moved to tackle the increase, one that flies in the face of the mayor's goal to combat income inequality. Last month, de Blasio announced a $2.6 billion investment to pay for the creation of 15,000 "supportive housing" units for the homeless. And earlier this week, the commissioner of the Department of Homeless Services resigned and the mayor ordered a 90-day review of the agency.

Even the manner of the Home-Stat announcement suggests its importance. The mid-December speech was originally thought to be a summation of de Blasio's yearly accomplishments yet the vast majority of it was about homelessness. And its location was also telling: it was to ABNY, one of the city's most influential groups, where de Blasio first unveiled his plan for universal prekindergarten as a longshot candidate in 2012.