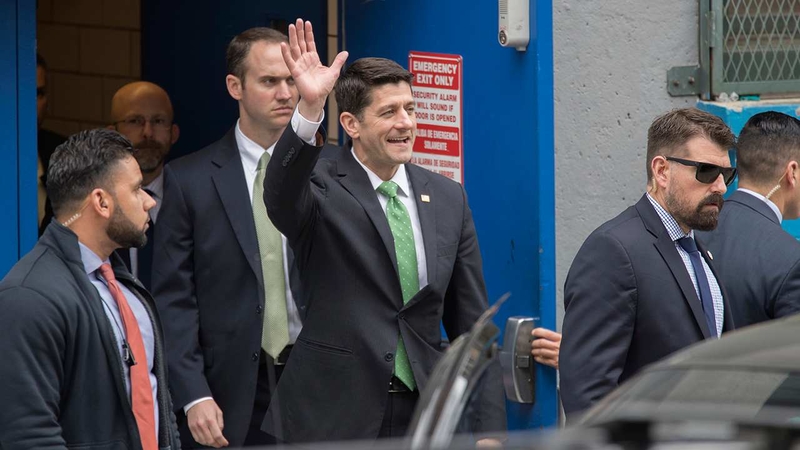 Demonstrators are not happy with the invitation to the school, which Ivanka Trump visited in February. It is run by Eva Moskowitz, who met previously with President Donald Trump to discuss the possibility of her becoming education secretary.

About 200 to 300 protesters congregated on 118th Street, across the street from the school, which was founded in 2006 and now has 34 locations and 9,000 students across the city. The demonstrations, however, were in response to the vote in the House of Representatives repealing and replacing much of the Affordable Care Act.

"I'm here for my friends, my children, my family, my neighbors, every American," protester Janie Willis said. "My heart is breaking."

The vote forced through by Republicans kills much of Obamacare, and protesters were chanting things like "Health care for all, not just for Paul," and "Paul Ryan, you will pay."

"New York hates Paul Ryan, and I hope he hears us loud and clear," Jackie Sheeler said. "He's an animal. He doesn't care. He doesn't care if people don't have health insurance."

The issue has become a catalyst for Democrats across the country who are upset with President Trump regarding some of the actions he has taken and especially about the health care vote and how it could leave millions of Americans with no coverage.

The Wisconsin Republican did not speak with reporters Tuesday as he slipped into the school, but he released a statement after the visit.

"Today was special, touring Success Academy, listening to these great kids and their committed teachers, hearing their stories," Ryan said. "The quality of teacher training and preparedness was extraordinary. They have a lot to be proud of, and these remarkable kids are getting a great education. That's what matters, giving every kid a fair shot at the American Dream."

The schools have won praise for students' high standardized test scores, but they've weathered controversies including a leaked video that showed a teacher disciplining a student harshly.

Moskowitz, a Democrat, announced in November that she was taking herself out of the running to serve as education secretary in Trump's Republican administration. She released the following statement after the visit:

"I was pleased to welcome Speaker Ryan to our flagship school in Harlem today. The education crisis in our city and country is profoundly damaging to millions of children, and parent choice has proven to be an effective lever in education reform. Speaker Ryan took the opportunity to see firsthand what is working: the excellent teaching and learning - in science, math, reading, and visual arts - that have placed our schools among the top 2 percent of all New York State schools. I share Mayor de Blasio's view (in at least this one case), that open dialogue is essential in finding solutions to our most difficult problems."
Related topics:
harlem (central)new york cityharlempaul ryan
Copyright © 2021 WABC-TV. All Rights Reserved.
TOP STORIES
Body matching description of Gabby Petito found in Grand Teton
Gabby Petito disappearance timeline: What we know so far
Gabby Petito's Long Island hometown mourns discovery of body
Attorney claims restaurant hostess who was attacked used racial slur
Chris Rock says he has COVID-19, urges vaccination
Emmys 2021: See the list of nominees, winners
AccuWeather: Feeling like fall!
Show More
Teachers' union president urges mayor to restore weekly COVID testing
Hochul announces plan to address school bus driver shortage
Man killed, 11-year-old among injured in Bronx barbecue shooting
2 injured after ejecting from Navy jet near Fort Worth before crash
France's Notre Dame cathedral secured at last. Next: rebuild
More TOP STORIES News