Hulu's 'The Handmaid's Tale' stars talk about life in quarantine, the best of season 3 and winning awards 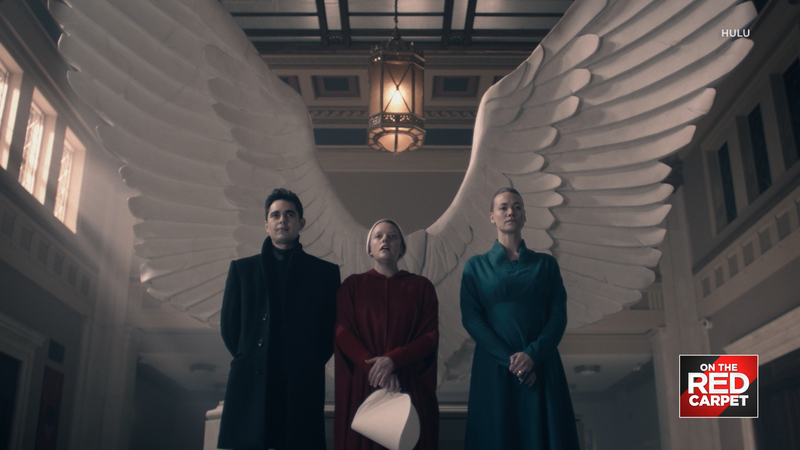 Hulu's 'The Handmaid's Tale' stars dish on the popular series

LOS ANGELES -- With production being halted because of the coronavirus pandemic, we're just going to have to wait that little bit longer for a new season of 'The Handmaid's Tale' on Hulu. Luckily, we have seasons one through three we can enjoy in the meantime.

On The Red Carpet caught up with the stars to see what life has been like during the extended hiatus. Elisabeth Moss, who not only stars but also executive produces and will direct in season four, told OTRC's Karl Schmid that the extended hiatus due to coronavirus was both a blessing and a curse.

"I've definitely had too much time to sit around going is that the way I should shoot it?" the star said. "You have two weeks to prep one episode and now all of a sudden we've had months," Moss added.

For Moss' co-stars Joseph Fiennes and Ann Dowd, "The Handmaid's Tale" has given them roles of a lifetime.

"He is just pure evil in one sense, but to get your teeth into Fred, what it offers to me in terms of an actor -- to stretch and to go to uncomfortable places -- has been really compelling," Fiennes told On The Red Carpet.

"I find great sympathy for her," Dowd explained.

Season three sees an entire episode dedicated to taking viewers back to see what shaped her character to become they way she has, a character that won Dowd an Emmy statue.

Elisabeth Moss also has an Emmy statue for her performance on the hit series and acknowledges what that recognition means. "It means a lot to us. We really value that kind of recognition you know."

Watch all three seasons of "The Handmaid's Tale" streaming on Hulu now.