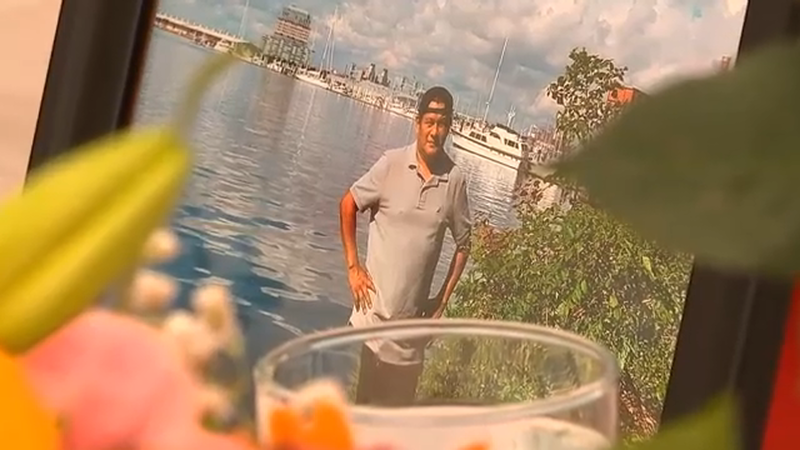 NEW BRUNSWICK, New Jersey (WABC) -- The children of 46-year-old Delfino Aparicio Lopez are proud to let everyone know who their father was.

"He was a selfless hardworking loving man that constantly thought of others," his son Ariel Aparicio said.

In a tragic second, Lopez was taken away from his family on April 19.

He was working as a taxi driver and was driving along Handy Street near Paul Robeson Boulevard when he was struck by a bullet.

Police say he wasn't targeted and was an innocent bystander who lost his life due to a shooter's violent act.

There is now an alter behind his home where friends are coming to mourn with his tight-knit, heartbroken family.

"After we lost him my mom just couldn't stop talking about how much they talk about their future together.. how much they were planning," Ariel said.

Police arrested 35-year-old Rhadisha Maurrasse on 1st-degree murder and gun charges. It's not clear what led to the shooting, but Lopez died of his injuries hours later.

Lopez worked to support his family and that was the most important thing to him, his eldest son Ariel said, because he wanted his children to have a better life than he did.

And he succeeded -- 20-year-old Ariel is now a junior at Rutgers University where he majors in math and economics.

"Once he had a son, it really grounded him and made him double down on his values and really care for his family a lot more," Ariel said.

In two days, their GoFundMe page that will pay for his funeral and make sure Ariel and his siblings continue their education has grown to more than $13,000.

Ariel has stepped up to be the man of the house and to continue his father's goals for his family.