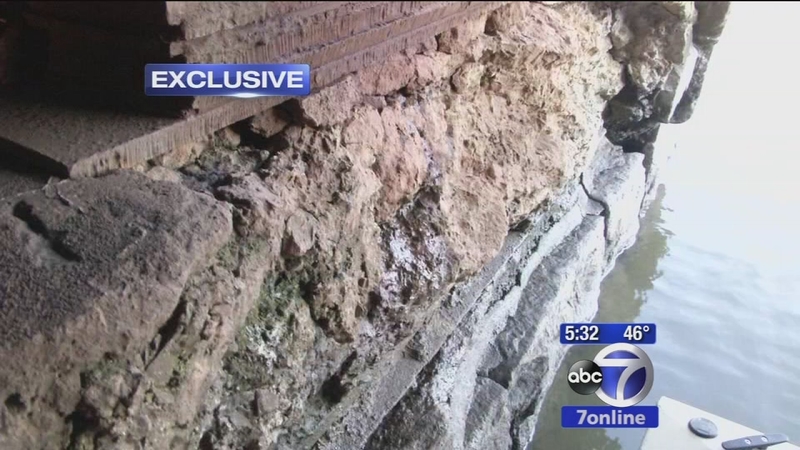 NEW YORK (WABC) -- For weeks now, the Eyewitness News Investigators have been studying the condition of railroad bridges along the Hudson River in New York. And we discovered several bridges in what appear to be troubling stages of disrepair.

When we made visits to bridges along a 15-mile stretch of rail line near Newburgh, New York, we discovered what appears to be major cracks in foundations, holes in steel columns and missing or loose bolts. One bridge in Orange County is riddled with big holes, the rust so bad it's eating through the steel. And there's more.

A makeshift railroad tie is jammed underneath a main column to give it support.

To get an up-close look at what is the most distressed bridge, we caught a ride with the environmental group River Keeper. They're worried about the bridges because millions of gallons of crude oil and other hazardous chemicals travel across them almost daily on trains.

Cracking of the bridge's foundation has led to a loss of large portions of concrete beneath a critical support beam, and several anchor bolts are loose or missing. At another bridge nearby, there were more cracks and crumbling concrete, and bolts so loose you can turn them.

"Around the foundation, there are cracks, so the foundation is already in pretty bad shape," CUNY Civil Engineering Professor Anil Agrawal said. "It's very badly cracked."

We showed him video of the two adjacent rail spans, who says at least one of them should be shut-down:

"Very dangerous," he said. "Your support here is pretty much, we are relying on a component which is unreliable, can undergo brittle failure, can cause the collapse of the system."

Part of the foundation is clearly crumbling, and what's amazing is that the rail company doesn't have to report it to the state Department of Transportation or the federal transportation department.

CSX, which owns the bridges, is left mostly to police itself. Like all rail companies, CSX files a one-sentence letter to the state and feds stating that all their bridges have been inspected and determined to be safe.

"What other industry can self-inspect where the consequences of an accident are potentially so extraordinary?" River Keeper's John Lipscomb asked.

CSX says it does annual comprehensive inspections of all its bridges.

"Frequently, the visual appearance of a bridge does not reflect the structural strength of or the soundness of the bridge," spokesman Rob Doolittle said. "And we are sensitive to that, but our management program ensures the safety of the bridges."

But Agrawal countered that more intensive inspections are needed.

"I cannot just go and look at this and say it is safe," he said. "To me, it looks very unsafe."