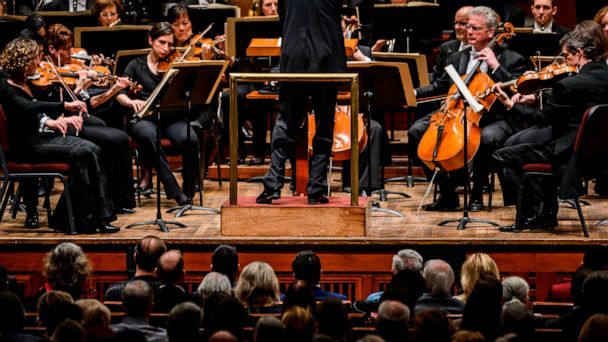 The Kennedy Center for the Performing Arts in Washington, D.C., will stop paying its musicians despite expecting to receive some $25 million in aid from the recently signed coronavirus national stimulus package, a union that represents the orchestra said.

The center's president, Deborah Rutter, told the National Symphony Orchestra Friday night its musicians would receive their last paycheck this week and that they would not be paid until the venue reopens, according to a statement the American Federation of Musicians.

The orchestra was also told that its musicians would lose their healthcare benefits at the end of May if the center remains closed at that time, according to The Washington Post, which first reported the pay stoppage.

The prestigious arts center earlier this month cancelled all performances through May 10 in an effort to follow the government's social distancing guidelines amid the coronavirus outbreak across the country.

Ed Malaga, president of the local chapter of the American Federation of Musicians, called the decision "outrageous" in the statement, provided to ABC News, and added the union has filed a grievance challenging the arts center's announcement on Friday to stop paying its musicians.

"This decision, from an organization with an endowment of nearly $100 million, is not only outrageous - coming after the musicians had expressed their willingness to discuss ways to accommodate the Kennedy Center during this challenging time - it is also blatantly illegal under the parties' collective bargaining agreement," Malaga wrote. "That agreement specifically requires that the Center provide six weeks' notice before it can stop paying musicians for economic reasons."

The Kennedy Center did not immediately respond to ABC News' request for comment.

Rutter told her staff earlier last week that she was suspending her $1.2 million salary during the crisis, according to the Post. Weekly payroll for the musicians is $400,000, an arts center spokeswoman said in the report.

"Without concerts and the corresponding ticket revenue, it is an unsustainable strategy to pay musicians to stay at home during this forced and still undefined quarantine period," Rutter said in a statement to the Post on Saturday. "These cuts combined with anticipated administrative staff furloughs and potential layoffs may seem drastic, however, we know the only way through this is for all union and non-union employees to participate in the solution. The other unions within the Center have also experienced this furlough and are not or will not be receiving compensation."

The Kennedy Center's announcement to halt payments to its musicians came just hours after President Donald Trump signed the $2 trillion stimulus bill, which includes a $25 million designated specifically for the Kennedy Center.

In her statement to the Post, Rutter said the $25 million would "provide long-term cash flow for essential personnel to ensure that we can reopen the Center and re-employ our staff and musicians."

The bill also includes an addition $75 million in grants available through the National Endowment for the Arts in an effort to support the art and theater community across the struggling industry to make the ends meet during the pandemic. Thousands of theaters across the 50 states closed shows last week, canceled remaining productions and suffered massive lay-offs.

A study earlier this month from Americans for the Arts, a nonprofit organization, estimated that the theater and arts industry has already lost $3 billion in the wake of the current public health and economic crisis.

Asked on "Fox and Friends" Monday about the Kennedy Center's decision to stop pay for the orchestra despite the financial boost, President Trump pivoted to politics and said, "That's the way [the Democrats] play." He went on to call for viewers to vote against Democrats.

Rep. Eleanor Holmes Norton, D-D.C., told ABC News in a phone interview Monday that the stimulus bill did not dictate exactly how the money should spent, and she criticized the Kennedy Center's management for not conferring with employees before making their decision.

The language of the bill that allocates $25 million to the center simply says the money will "provide operating support to the national cultural center and Presidential memorial during the coronavirus crisis," and that the funding "ensures that the Center, which employed more than 3,000 people last year, will be able to reopen its doors to the public once the crisis is over."

The combined $100 million funding for the Kennedy Center and for the National Endowment for the Art and Humanities had also previously caused a stir among some Republicans who questioned the inclusion of the arts center in the emergency rescue package.

Last week the president defended the aid after slicing $10 million off the original $35 million he said had been requested by Democrats. The president said he's a "fan" of the funding, saying the arts center has "suffered greatly because nobody can go there." But Trump maintained distance, saying "it was a Democrat request," and that "you got to give them something."

What to know about Coronavirus: