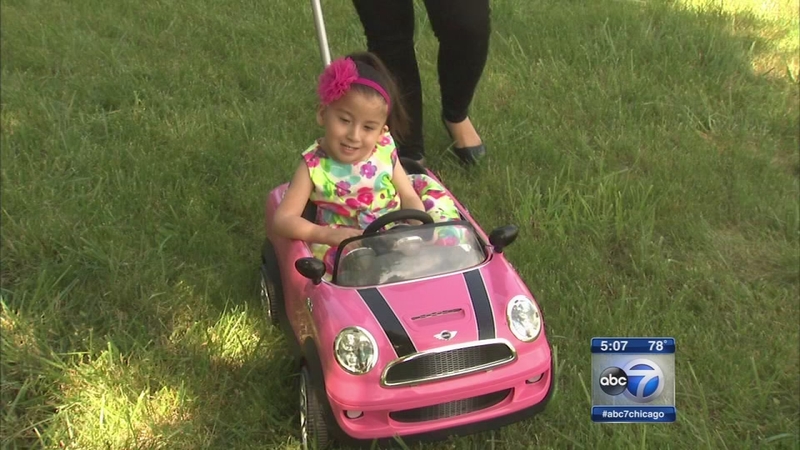 Kimberly Alvarez is recovering after undergoing potentially life-saving surgery. Initially the state said it would not pay its share for the operation.

But after ABC7 Eyewitness News aired a story in April, the state came through with the funding.

Less than a week after getting the surgery, Kimberly is back home from a hospital in Philadelphia and riding in the toy car she loves.

"She looks great and she's back to herself," said her mother, Mayra Pasillas.

Kimberly suffers from a rare form of scoliosis that threatens to make her ribs collapse around her lungs. She needs a special brace to survive and because she is growing quickly it needs to be replaced regularly. But for months Kimberly's medical future was in doubt because the state of Illinois failed to release the MedicAid funding needed to pay a specialist in Philadelphia to perform the surgery. After our story in April, DuPage County Commissioner Pete DiCianni was able to convince state and federal officials to come together to release the funds.

"It's sad. And if she didn't have an advocate like us, I don't know if she would have even had the opportunity to have this life saving, this surgery. And this is why it's so important that we get a budget, and we get things settled in Springfield," DiCianni said.

Now Kimberly is playing like any normal 3-year-old. After spending months of her childhood in the hospital her parents are now hopeful for the future

"We can't give up. If she doesn't give up, we don't have the option to give up," Pasillas said.

Doctors say Kimmy needs a new brace every two or three years until she stops growing. Otherwise it might literally rip out of her skin and collapse her lungs, which could be fatal.