KABC
DOWNTOWN LOS ANGELES -- Just over a week after NBA superstar Kobe Bryant and eight others were killed in a helicopter crash, crews on Monday began taking down the sea of purple and gold left by fans outside Staples Center.

In the seven days following the tragedy in California, mourners gathered at "The House That Kobe Built" and L.A. Live to leave written messages, flowers, candles and other gifts that will be given to Vanessa Bryant and her family.

The perishables, like flowers, will be composted and sprinkled around L.A. Live. Other items - such as jerseys, basketballs and artwork - will be stored and cataloged at the request of the Bryant family.

Many traveled from other parts of the country to pay their respects and share memories of the legendary player they admired throughout his 20-year career with the Lakers.

"This entire week we've felt like we've lost a relative, a family member, but overall we lost a hero," said Grant Mailo who traveled from Arizona.

Fans began gathering at L.A. Live hours after the crash and continued to pay their respects throughout the week, including on Friday when the Lakers returned to the court for the first time since Bryant's death in a matchup against the Portland Trail Blazers.

LeBron James delivered a heartfelt tribute to the late Lakers legend before the game.

James started off by acknowledging the other eight lives lost, including Bryant's 13-year-old daughter Gianna. He then scrapped his prepared speech to "go straight from the heart."

"I want to continue, along with my teammates, to continue his legacy - not only for this year, but for as long as we can play the game of basketball that we love because that's what Kobe Bryant would want. So in the words of Kobe Bryant, 'Mamba out' but in the words of us, 'not forgotten.' Live on, brother."
Report a correction or typo
Related topics:
staples centerkobe bryantmemorial
Copyright © 2021 KABC-TV. All Rights Reserved.
KOBE BRYANT 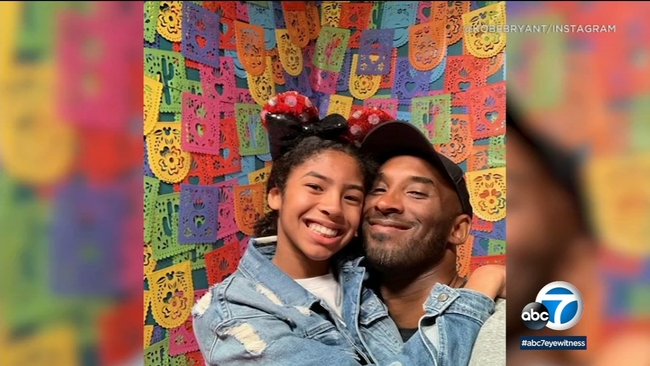