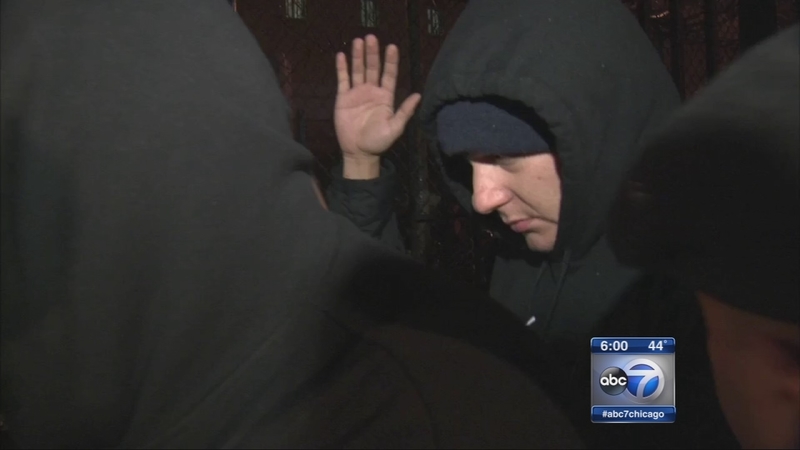 Jason Van Dyke out on bond

CHICAGO, Ill. -- After viewing the police dash cam video tape privately and in open court, a judge set bail at $1.5 million for Jason Van Dyke, the Chicago police officer charged with murder in the shooting death of Laquan McDonald, 17. Van Dyke posted bond and was released from jail shortly after 5 p.m.

Van Dyke's family posted the $150,000 bond, 10 percent of the bail amount. He was met at Cook County Jail by his father. He said nothing as he walked out of the jail to his car, despite a significant media presence. He is due back in court for a status hearing on Dec. 18.

In court on Monday, Van Dyke wore a brown Cook County Jail jumpsuit, his hands and feet shackled as he was surrounded by several sheriff's deputies. There was no expression on his face when his no bond status was lifted.

"He is prepared to defend himself," said Dan Herbert, Van Dyke's attorney. "He is very scared about the consequences that he's facing, he's concerned for his wife and his children, but he is handling it like a professional and he is ready to move on and take this step by step."

There is no disagreement that Van Dyke, 37, fired the shots seen on the dash cam video. At issue is whether he feared for his life. His supporters and especially his union, the Fraternal Order of Police, say there is more to this case than the videotape.

"Prior to the engagement of the first shots fired, the shoulders square off to the officer with knife in his right hand," said Dean Angelo, President of the Fraternal Order of Police.

State's Attorney Anita Alvarez did not comment on the bond hearing. She is facing harsh criticism for the delay in filing charges in McDonald's death, and then only doing so on the eve of the video's release. She responded with a statement that reads:

I will not be bullied by politicians who do not have a full understanding of the facts of this investigation. I offer no apologies for enlisting the FBI to investigate Laquan's murder because obviously the Chicago Police Department could not investigate themselves in this case. And I certainly do not apologize for conducting a meticulous and thorough investigation to build the strongest possible First Degree Murder case against Officer Van Dyke.

Angelo said that he is concerned not only for Van Dyke's safety but for the safety of all uniformed police officers in the city. He is furious that charges were dismissed for a protester who allegedly hit a police officer during the demonstrations immediately following the release of the dash cam video.

"Someone walks out of felony bond court that punches a police officer because of a phone call that is made, or because someone felt it was the right thing to do for community peace," Angelo said. "But that is unprecedented."

Protests have been ongoing since the release of the video and announcement of charges for Van Dyke on Tuesday, Nov. 24, and demonstrators were present at the courthouse.

Protesters marched around City Hall Monday afternoon holding signs and pushing coffins while changing "16 shots!" Monday afternoon. NAACP leaders joined local clergy and others to call for police reform in Chicago. After speaking with media, protesters linked arms and knelt in the street while singing "We Shall Overcome," blocking traffic. Chicago police arrested at least 8 of those protesters peacefully.

Protestors marched on Michigan Avenue on Black Friday, which is one of the busiest shopping days of the year. Organizers said they plan to protest 16 days, one for each time the teenager was shot.


Protestors call the delay in charges against Van Dyke a police cover-up. Some are calling for the resignation of Chicago Police Supt. Garry McCarthy. Others want Chicago Mayor Rahm Emanuel to step down.

Both the Chicago Police Department and Mayor's Office have denied any wrongdoing.

The ABC7 I-Team uncovered other dash-cam video of the moments leading up to the shooting, including the camera from Van Dyke's squad car.

The blurry video shows the teen running from police. McDonald was shot about 30 seconds later.

Audio is missing from the video because batteries in the dash-cam were put in the wrong way. There are faint sounds of sirens, but no voices.

"There were apparently technical difficulties. But in no way shape or form is there any evidence that anything was tampered with," Supt. McCarthy said.

Officers are being retrained to avoid this, McCarthy said.