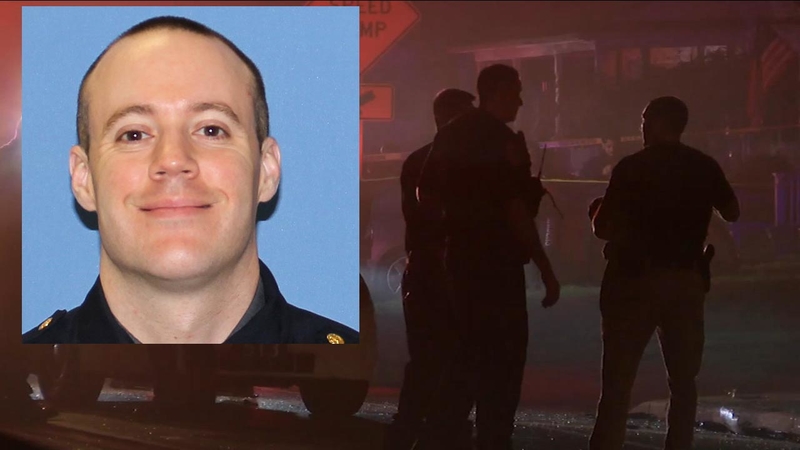 PATCHOGUE, Suffolk County (WABC) -- A Suffolk County police officer who remains in critical condition after being stabbed during a traffic stop came within minutes of losing his life and is still not out of the woods, doctors said Monday.

It happened Saturday in Patchogue, where Officer Christopher Racciopo tried to pull over the driver of a Mercedes who was driving with his headlights off.

Police say that driver, Jonathan Nunez, fled the scene and then crashed into another car before attempting to flee on foot.

Racciopo, a 31-year-old who joined the force in 2018, ran after him, and a struggle ensued. Police say Nunez stabbed the officer in the leg, rupturing a major artery.

Retired Marine Guillermo Sandoval, who lives nearby, watched it play out and ran to the officer's aid.

"He said, 'I'm hurt, I need help, please help,'" Sandoval said. "At that point, I saw the wound which was on his thigh, a few inches down from his groin area. I said to him, 'Brother, I'll go and get a tourniquet. I'll get a belt. Stay awake.'"

When he returned, another officer had arrived and had applied a tourniquet. They added Sandoval's belt too.

"I prayed for him last night and I wish him well," Sandoval said. "I hope that he recuperates as soon as possible. God bless him. God bless his family. And I give him a lot of credit for doing his job and going after the suspect."

Dr. James Vosswinkel, Chief of Trauma Surgery at Stony Brook University Hospital, said the officer suffered a life-threatening injury and would have bled to death in 20 minutes.

"We are not out of the woods," he said. "We obviously hope life-threatening complications don't set in. We're very cognizant. We're aware of him with the monitoring we're doing."

Racciopo lost the majority of blood in his body and remains sedated and unable to talk, he said, though he holds out hope the officer will be able to use his leg again and will not be disabled.

"Hopefully we can get him through the consequences of shock that he's suffering," Dr. Vosswinkel said. "So that we really have the optimum outcome for such a severe injury."

Sgt. Frank Samartino responded to the scene and described getting radio calls from Racioppo that he had been injured and was losing a lot of blood.

"I heard Officer Racioppo request rescue," Samartino said. "He stated that he was bleeding heavily and he was losing consciousness."

He, another officer, and Sandoval picked up Racoppio, put him in a patrol car, and sped off to the hospital.

"We rushed him full speed to a police vehicle that was some distance away," he said.

He said he knew they had only seconds to get the officer to a hospital, and he also described holding Racioppo's hand as the officer faded in and out of consciousness.

"At one point in the vehicle, we thought we lost Officer Racioppo," he said.

While Sandoval helped Racciopo, two other good Samaritans -- one of them a former NYPD officer -- held Nunez until he could be taken into custody.

Nunez is facing charges for DWI and aggravated assault on a police officer.

"We all talk about the idea that our officers put on that uniform every day and go out and protect and serve and risk their lives," Suffolk County Police Commissioner Gerladine Hart said. "The families of these officers know it, and what we saw Saturday night was proof of it."